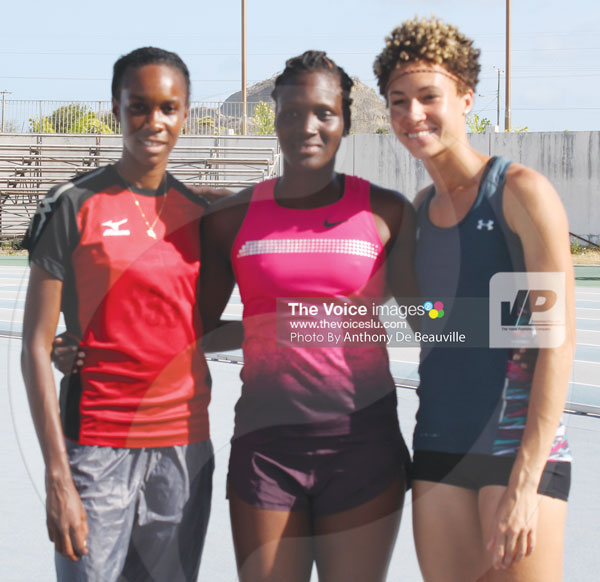 More than 400 track and field athletes will converge on the George Odlum Stadium at Vieux Fort this weekend when the St. Lucia Athletics Association stages the annul National Individual Track and Field Championships.

Nine overseas based athletes are in the mix, along with 30 athletes from the French speaking island of Martinique that will bring the much needed flavour and a high level of competition in the age groups and youth category as they compete against some of St.Lucia’s very best.

The two day championship will see the likes of Rosen Daniel and Corneil Lionel in the men’s 200 metres. The two athletes will be seeking to meet the Olympic qualifying time of 20.50 seconds set by the IAAF before the deadline date of July 7.

With exactly 43 days to go before Rio Olympics, the friendly rivalry in the ladies jump continues with first time Olympian Jeannelle Scheper and multiple “sportswoman of the Year” and three times Olympian Levern Spencer, competing against each other for the last time before Rio.

Still looking to qualify for the Rio Games is the 2014 Sportswoman of the year Makeba Alcide, who will attempt to show some class on the track in the Heptathlon she will be looking to amass 6200 points to secure her ticket to Rio when she comes up against a very determined and much improved Shermalyn Albert.

Sprint queen Julien Alfred currently studying in Jamaica will be in the thick of things as well, Alfred who represented St. Lucia at the 45th CARIFTA Games in Grenada in April will attempt to defend her title as the fastest female in St. Lucia when she face the starters pistol against season campaigners Verlyn Taylor and overseas based Pernell Mitchell .

In the middle and long distance events male “athlete of the year” Michael Biscette and St.Lucia 2016 CARICOM 10 kilometre representative Jason Sayers will go head on against Neville Dupre, Winsbert Sylvester and Wayne St. Ange in the men’s 5000 metres.