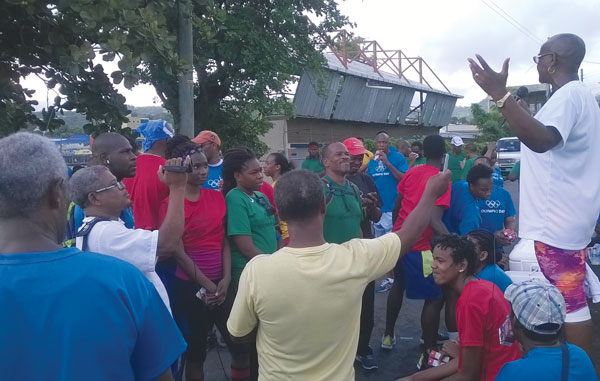 A total of 185 runners participated in last Sunday’s Olympic Day Run out of a registered 360.

Track and Field had the best turn out among affiliates of the St. Lucia Olympic Committee Incorporated (SLOC Inc,) with 37 participants out of their 59 registrants. Lifesaving had 21 participants on the day out of 37 registrants and sailing had all 15 of their registrants being involved in the run.

The Boys Training Centre (BTC) had an impressive eight of their 13 registrants running and there were 13 individuals who were not attached to any member Federation. Three executive members of the SLOC Inc. did the route including President Fortuna Belrose and Vice Presidents Teddy Matthews and George Charlemagne.

“We thank all of you for participating and ensuring this event with our Olympic family came off. Let us continue to exhibit the benefits of exercise and healthy lifestyles to overall wellbeing, Belrose said in a brief presentation to participants at the end of the Run.

Although stiff competition for placings is not the primary objective of the run, Jason Sayers continues to be one of the consistent runners in this event and was again the first to complete the course from the Castries Market, up the Sir John Compton Highway left into Mandela Drive turning at the Mexican Embassy and finishing outside the Red Cross Building.

“It was a much safer route and we were happy that the event came off without mishaps, ” Secretary General of the St. Lucia Olympic Committee Inc. Alfred Emmanuel said.

Also among the participants were former Olympian Zephrinus Joseph, and Stephanie Devaux Lovell who will be participating in the 2016 Rio Olympics having been granted a universality place in the sport of Sailing.