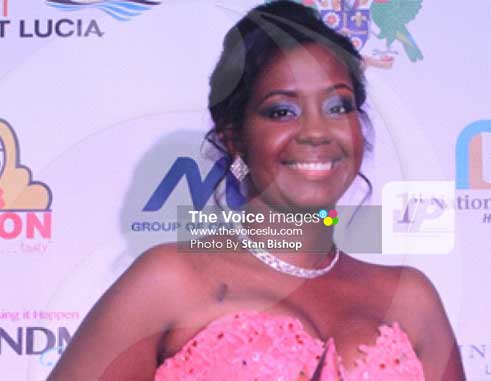 AT first glance, Julianna Ward-Destang seems unassuming. But the soft-spoken businesswoman is a major heavyweight in the local finance and tourism sector. A Chartered Accountant by profession, she has spent the past decade honing her business skills, beginning with a stint as an auditor at Deloitte and Touche in Canada and later as Director of Finance at Bay Gardens Resorts. But it’s her most recent business venture that seems to create a major splash – not just for her, but especially the people who visit Splash Island Water Park on Reduit Beach.

After leaving Saint Lucia for Canada in 2000, Ward-Destang began her studies at York University, from where she attained a Bachelor’s Degree in Computer Science and a Bachelor of Arts in Accounting. She spent a few years working in Toronto, assisting businesses with their accounting and offering financial planning advice before returning to Saint Lucia in 2008.

She has since served as Director of Finance at Bay Gardens Resorts, playing a pivotal role in engineering the family-owned hotel chain’s fortune for the better following the aftermath of the global financial meltdown in 2008. Her husband, Sanovnik, is son of Joyce and Desmond Destang, owners of that hotel chain, and serves at Bay Gardens Resorts’ Executive Director.

Ward-Destang said her stint in Canada was geared towards getting as much experience she possibly could and returning to Saint Lucia to convert that business sense into dollars. It turns out that the concrete jungle of North America, especially the darkness in winter, fueled her creativity for her latest project.

“For me, the beach is a big deal,” Ward-Destang explains. “It’s an amazing feeling to be able to go to the beach and experience the warm sunshine. I spend a lot of time on the beach with my son, Antoine, who also loves the beach. He loves to swim and enjoys the other fun activities that occur there.”

While she takes delight in seeing many children on the beach, the young entrepreneur lamented that many of them cannot swim, which is something she seems determined to change. That reality was another source for the idea of the water park. The self-confessed avid beach goer said the waves help her creative process while she digs her toes into the warm coastline sand.

“I go to the beach when I want to relax or come up with something creative because I find the water calming. So having a business on the beach was always a longtime idea of mine. The water park was the perfect fit,” Ward-Destang said.

Finding the right infrastructure for the water park was a challenge, Ward-Destang said, but when an appropriate model was found by late March last year, plans went full steam ahead, with the water park opening to the public on August 1.

The water park now attracts guests not just from the three-property Bay Gardens Resorts chain but also other hotels. Even cruise ship visitors participate in the fun. Saint Lucian fun-seekers make a big splash at the park, too, with special offers and complimentary passes being offered to schools and other organizations. Ward-Destang said many of the water park’s guests are already riding high on its high wave of generosity.

“We try to reach out to young people especially because a lot of them have never experienced anything like this,” she said. “Some of these children have excelled, whether in academics or sports, so we try to give back to the community in a lot of ways.”

Saint Lucian patrons pay EC$23 per hour while foreign patrons pay EC $31. 05. However, special discount packages are also available depending on group size. Guests at any of the Bay Gardens properties get six 1-hour passes free while all-inclusive guests get half-day passes.

The colourful floats, weighed down by forty-six 500-pound anchors, are properly secured to the sea bed. The park’s 13-strong staff was specially-trained by a team of experts from Germany to ensure that the infrastructure is properly maintained. Among the attractions are monkey bars, climbing wall, trampoline, volleyball court and wiggle bridge.

Splash Island Water Park is billed as the Caribbean’s first floating open watersports park. The fun is set to increase a few notches with the park expected to expand slightly this summer to add more fun features for the thousands who pour in to take in the excitement. For now, though, seeing an idea become tangible is already a dream come true.

“The water park has created so many avenues for us. It’s slowly changing the dynamics of the guests we have as well because we have many families with children coming to stay with us,” she said.

Her advice to other budding entrepreneurs is to be willing and open to try different things and ignore even the slightest iota of discouragement. She believes that once you have a great idea, the next step is to find people who support that idea.

“Do your research on organizations that offer support to young entrepreneurs and come up with a solid business plan. Don’t be afraid to fail. The sky is the limit,” Ward-Destang said.

While Splash Island Water Park might seem both fun and business for Ward-Destang, her idea managed to get the attention of the St. Lucia Chamber of Commerce, Industry & Agriculture. She was nominated for three awards at this year’s St. Lucia Business Awards held in January: Idea of the Year Award, Prime Minister’s Award for Innovation and Entrepreneur of the Year Award.

She went home with the Entrepreneur of the Year Award. But, as she explains what the win means to her, it’s likely that the award is lying somewhere on the Reduit Beach where her team can see it.

“It wasn’t a trophy for just me, but for my whole team. It has my name on it but it means so much more than just me. So I’m really grateful to the hardworking team that is just passionate about what they do.”