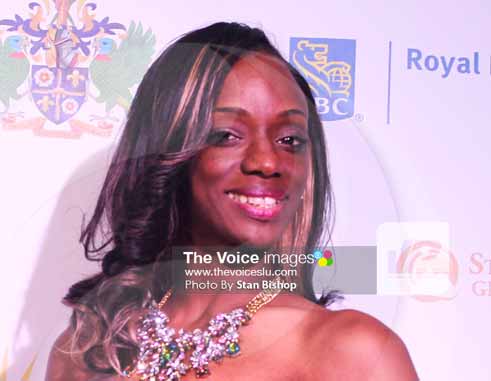 FOR nearly three years, Mandisa Morrison has seen her dream of being in business materialize into something tangible. A mixture of passion, unrelenting research and the tenacity to beat the odds is certainly paying off for this 31-year-old entrepreneur who is already putting a great deal of soul – or sole, if you prefer – in the shoe repair business.

Long before she got her feet wet in the shoe repair business, Morrison had a deep love for shoes, particularly high heels. Each pair of shoes has always meant something dear to her and she still has the habit of holding onto them. Call her a hoarder, if you will, but this La Clery, Castries resident just does not like to throw shoes away.

Morrison said she was first introduced to the concept of shoe repair as a little girl vicariously through her grandmother who would normally get her heels done at the shoe repair shop. Soon after she started working at Accela Marketing in the north a few years ago, she found herself having to go all the way to Castries to fix her own shoes.

Shoed-in by that inconvenience, Morrison felt there was a need for that kind of service in the north. While praying on a fateful day in 2012, the big eureka moment hit her: it was time to make a forward step toward filling a need. Plans were soon set afoot in getting her business off the ground.

“I started doing some research, which I still refer to as my fun period,” Morrison told me, reminiscing on her business’s nascent stage. “I drew up and distributed many questionnaires and did a lot of online research. I even sat down on the sidewalks with some of the cobblers just to get an understanding of what kinds of services people wanted done, how they were done, and so on.”

Right after that information-gathering phase, Morrison put her plan together and opened her business, Shoe Rehab, in June, 2013. But finding the right financial footing for her business was not a walk in the park, as Morrison later found out.

Sourcing funding for a small, young business is almost impossible as many lenders are hesitant to plunk down top dollar on even the best ideas. However, Morrison credits Brian Louisy, Executive Director of the St. Lucia Chamber of Commerce, Industry and Agriculture, for giving her the big push towards getting this far.

“To this day, I still thank him for that. I mean I had a good plan but I soon got tired of running around seeking funding. I learned that the key thing was having a business plan, which any young person hoping to get into business must have. However, I think a lot of people are just lazy because they don’t want to have one. I also learned that one doesn’t have to re-invent anything; you can just put a creative and interesting spin on something that exists.”

Shoe Rehab currently has two locations at JQ Rodney Bay Mall and Gablewoods Mall and has a staff base of five, all of whom Morrison ascribes credit to in the business’s successful strides thus far. One of the plusses of the “great team”, she said, is the fact that despite being young, they are all artisans dedicated to their craft.

“One of the hardest things for me was finding reliable workers. Many people engaged in this kind of business often do it as a side job. But we saw it as something bigger, especially since Shoe Rehab is an affiliate member of the SSIA (Shoe Service Institute of America), an international group,” Morrison explained.

Morrison has used her marketing experience from her Accela Marketing days to promote her business as a trendy, likeable entity out to be sustainable and socially responsible. In fact, Shoe Rehab sponsored the “Men In Heels” Challenge in 2014 and 2015. That competitive activity entails men sprinting over a short distance in rehabilitated high-heeled women’s shoes and aims to raise awareness and support for cancer.

Shoe Rehab also sponsored one of the contestants in last year’s Gros Islet Queen Pageant; that contestant won the competition. Morrison considers Shoe Rehab’s participation in that event as a major achievement for her relatively-young company. Giving back, she said, is an imperative for every dream realized.

On occasion, Shoe Rehab donates repaired shoes that would have been left by customers for quite a while. The small company also undertook a shoe drive collecting shoes, cleaning and repairing them, with children being the ultimate beneficiaries. Morrison hopes to make that shoe drive something bigger this year and intends to partner with some corporate partners to leave a greater social imprint in the community.

One of the major selling points of Shoe Rehab, Morrison said, is the wide variety of products and services offered to customers, many of which are not offered elsewhere. Despite some customers finding the rates a little pricey, Morrison believes Shoe Rehab is competitively priced and offers a best practice repair, the kind of service where a pair of shoes needs no additional repair after leaving Shoe Rehab.

When Morrison’s business started, one of her close friends, Rankin Morgan, owner of 1-2-3 Digital Ltd, won the Idea of the Year Award at the St. Lucia Business Awards. It was a big thing for her back then seeing him win and always something she wanted to accomplish on her own. So when she got a call a few months ago that she was nominated at this year’s awards, she could not contain the excitement.

At the Saint Lucia Business Awards held last month, Morrison tied with 23-year-old Ciceron businessman, Keran Rosemond, for the Young Entrepreneur of the Year Award. The moment was a magical and rewarding one, she said, but she still has a few more miles to walk as she tightens the laces on her business shoes.

“Shoe Rehab is not even close to where I see it being in my mind,” Morrison tells me. “It involves a lot of fun but also some ups and downs. I’ve had employees walk out on me, so I’ve had to learn to do some of the things that we offer at the company. But I remain thankful nonetheless.”