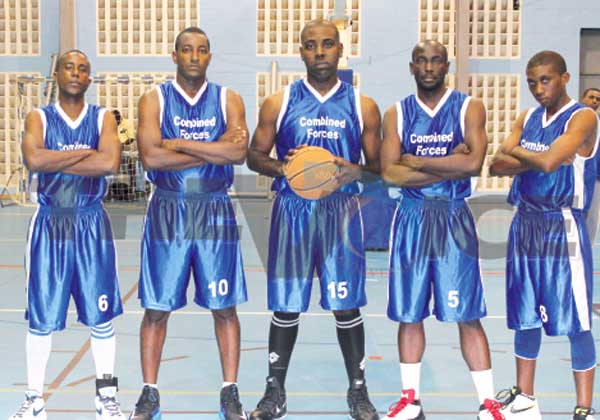 FOUR games were played in the KFC Commercial Basketball League this past weekend at the Beausejour Indoor Facility with wins for Digicel, Media All Stars, Teachers Union and Sandals High Risers.

In Group B on Friday evening, the Digicel 4G ballers, avoided being cleaned up by CBL new comers Lewis Industries 67 – 57. The game was extremely competitive and hard fought, with several lead changes throughout each quarter. Ultimately, Digicel was able to pull away and secure the win due to superior inside play, led by their big men and co KFC Players of the game Jadson and Yenei Montoute who tallied 20 points, 9 rebounds, 5 blocks and 15 points and 23 rebounds respectively.

For Lewis Industries, the always formidable Lenard Emanuel chipped in 23 points, 6 rebounds, 3 assists and 3 steals in the loss.

In Game No.2 from Group C, it was all business for the Media All Stars who took to the court wearing branded warm-ups compliments of their sponsors, Commercial Kings. With a balanced and poised offensive and defensive strategy, they eventually overwhelmed the Ministry of Public service and pulled away in the second half. In the end, they defeated the Ministry, 63 – 38.

The KFC player of the game was Media’s Arthur Lisson with 24 points, 9 rebounds and 3 blocks. Darrell Anderson was the standout for the Public Service with 6 points and 10 rebounds in the loss.

On Saturday, in Game No.1 from Group A – The Teachers Union put a schooling on the “new look” Insurance All-stars. The teachers never seemed challenged and cruised to a final score of 63 – 47. Player of the Game was Nigel Francis who poured in 24 points, 8 rebounds and 5 steals for Teachers.

For the Insurance All Stars, Jean Louis Edward was the high man recording 18 points and 10 rebounds and was an impressive 10 for 11 at the free throw line.

Game 2 of the double header featured a showdown in Group D, with Sandals High Risers going to head to head against their rivals Anse Chastanet Ballers.

In the first half, both teams appeared to be feeling each other out, with Sandals taking the slight edge at the half. On the resumption, the High-risers lived up to their name and upped the tempo and pressure on their opponents floating to 61 – 44 victory.

Kurt Weeks was the high man for Sandals with 11 points and 5 rebounds. For the Anse Chastanet Ballers Chris Alexander put in a workman’s effort with 14 points, 6 rebounds, 6 steals and 5 assists.

The tournament continues tomorrow evening at the BIPF from 7:00 p.m. when Police play Media All Stars in what is expected to be a thriller on centre court. In Police’s opening game they went down to BOSL / ECFH 50 – 48.