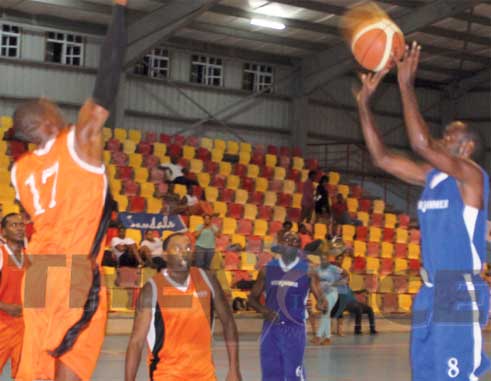 DIGICEL and the Inland Revenue Department will be in action tomorrow evening from 7.00 p.m. as the Commercial Basketball League continues with all its excitement, thrills, horn blowing and flag waving at the Beausejour Indoor Practice Facility.

A win for either team will see them climb to the top of Group B standings.

Meanwhile, eight teams were in action this past weekend, Defending CBL champions St. Lucia Fire Service were looking to bounce back from the loss they suffered on opening night when they came up against the Insurance All Stars. From the opening quarter the Fire Service asserted themselves with their physical presence and inside play. At half-time they led 29-14.

The second half followed the same pattern, as the Insurance All Stars found it difficult to score against the significantly larger Fire service players, and ultimately were crushed 59 -33.

The Fire Service were led by CBL and National League dominating big man Marcian Calderon who scored 26 points, pulled down 18 rebounds and added 6 steals-easily earning the KFC “player of the game”. In the loss, Jean Louis Edward did all he could to keep the Insurance All Stars competitive, contributing 11 points, 3 rebounds and 4 steals.

In Game 2, Sandals High Risers took on fellow hoteliers Windjammer Landings. By the end of the first quarter the score was 7 – 5 in favour of Sandals. Despite the low offensive output, the fans for both teams kept the environment festive with loud cheering and flag waving. That seemed to have motivated the High Risers and in the second half they hit the accelerator and scored 20 and 22 points in the 3rd and 4th quarters respectively. In the end, the more experienced Sandals team won comfortably 57-28.

The Supreme Bleach player of the game was Simeon Medard of Sandals. He was also assisted by team mate Ricardo Sayers who scored in 11 points and 3 steals. For Windjammer Lawrence Pierre chipped in 12 points and 7 rebounds in the loss.

On Saturday, in Game 1- The Goddard Group was also on the bounce back train and trying to recover from their first loss of the season as the came up against new comers Lewis Industries. From the opening tip Goddard seemed crisp, aggressive and eager to set the tone early against their opponents. The more experienced Goddard team though was able to assert their will and never relinquished the lead despite being outscored by Lewis Industries in the final quarter. Goddard sailed to a 30 point victory over Lewis Industries 78 – 48.

The Supreme Bleach “player of the game” was national league standout Andre Louison who stuffed the stat sheet with 17 points, 11 rebounds, 7 steals and 5 assists. For Lewis Industries, Darnvy St. Marthe did his part, adding 18 points, 7 rebounds and 3 assists.

In the final game of Saturday’s double header, the Renwick Cosmos came up against the Anse Chastanet Ballers. From the opening tip, all indications were that this game was going to be a highly competitive and evenly contested affair. Anse Chastanet won the first quarter 13 – 12, Renwick won the second 14-8. At the half, the Cosmos held a slim lead 26 – 21.

In the second half, Renwick settled down and displayed tremendous poise and offensive execution under the watchful eye of Coach Raphael Damon. Unfazed, Anse Chastanet continued to attack but was unable to find the bottom of the Renwick basket and ultimately lost 70 – 49.

Despite strong efforts by National League players, Durocher Antoine and Nigel Butcher who scored 21 points, 7 rebounds, 5 assists and 22 points, 9 rebounds and 5 assists respectively, the KFC “player of the game” went to the diminutive Kim Henry of the Cosmos who not only registered 8 points, 4 rebounds, 2 assists and 2 steals, but harassed the Anse Chastanet players relentlessly while simultaneously energizing his players and exciting the crowd!

For Anse Chastanet Linzel Alcee had a strong game with 14 points, 13 rebounds and 4 assists in the loss.