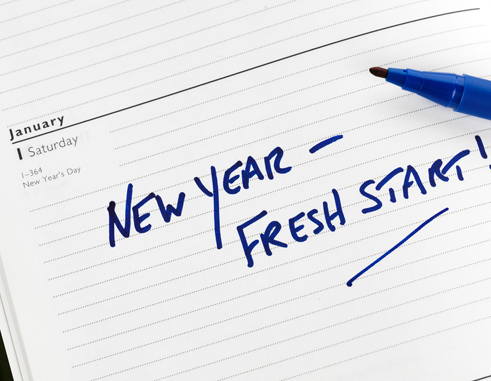 FOR the New Year, how about us dropping the boring old clichés and adopt some meaningful resolutions that will stick around much longer than up till February, if I even dare say so long.

The self-promises to binge eat and drink less, exercise more or join the gym, save more money and leave last year’s problems in 2014 are all so blah blahblah that it’s become the New Year’s theme song.

This year why don’t we all try to achieve goals that are simple yet extremely effective no brainers?

Let’s begin with perhaps the biggest and deepest sounding resolution that is commonly made but is clearly nonsensical…leaving your problems in 2014.

Umm sorry to burst your naïve little bubble but unless resolved, your problems will stick with you till the end like Chucky. Rather than bury your head in the sand and hope that they magically disappeared as the clock struck 00:01 a.m. on January 1, man up and face your issues head on perhaps once and for all so that whatever load you are bearing is lightened…way easier said than done but the end result is worth the fight.

With that said, we need to try to stress over the little things less. We are so quick to say that things are “bad”, “hard”, etc, but are they really? Like I always say, turn to CNN, BBC, MSNBC Aljezeera and look at the atrocities taking place in other countries and then come again and look me in the eyes and say things are bad in St. Lucia. Yes, having arrears on your bills really do suck but compared to having your house and family bombed, it’s really not the end of the world.

As a mother I can imagine that it is worse to see that you have mouths to feed and hardly any money but I will still be thankful for the fact that I surely won’t have to walk too far before someone gives me a breadfruit or something growing in their backyard and that I don’t have to watch my children starve to death or die from easily treatable diseases like they do in some African and Asian nations. My heart would be shattered to pieces if I had to face a breakup with my partner tomorrow but I would still survive because if the army wives losing their husbands at war in the most gruesome ways can pull through with children in many cases, then a breakup is nothing to kill myself over.

Do you catch my drift with my last three examples? I really hope so.

We also need to stop taking things so personally. Lighten up! So what if some rude and unmannerly person bumped into you and didn’t say sorry? Leave them to God. There’s no need to quarrel or fight with them. There’s no need to grab the cutlass or gun because someone called you a name or offended you. I know words hurt but it takes a bigger and more honourable man/woman to walk away or ignore a loud mouth.

If you have to leave anything behind in 2014, let it be that monstrous ego that has a knack for getting you into trouble.

Now with the mention of words being hurtful, another important resolution is to stop gossiping. Words are indeed hurtful and people continue to fail to realise that words can have the same deadly force as knives, cutlasses and guns. Let’s put granny’s age old words into practice and say nothing if you have nothing good to say. Focus on YOUR OWN affairs and try to speak only words of love, kindness, and positivity into and about the lives of others for a change.

On the lighter side, rather than fool yourself by going on a two day diet or paying for a gym membership that you will never use, how about you applying this simple resolution to your life that is also very free, self-respect.

If you respect yourself you will not have to worry about a number of the superficial issues like bingeing, promiscuity, trouble with the law etc. because when you place your well being as a top priority, your health will matter so you will know that you really should eat healthier, drink less alcohol and smoke less or not at all, you will know that Sexually Transmitted Infections and unwanted pregnancies did not stay back in 2014 so you need to protect yourself sexually and you don’t want to end up on the news or be the latest social media buzz for some fights that you got into or for stealing weaves or money from stores and business places or for robbing school children of their new phones. Having self-respect will stop you from all these forms of pain and humiliation.

Lest we forget respect for our nation. St. Lucians, in 2014 our country’s name was dragged through the mud and back, let’s try to turn that around this year…keep your hands to yourselves and if your fingers are sticky, wash them off or put them to good use by GETTING A JOB or finding something positive to do with your hands rather than robbing and hurting or even killing innocent people.

Another resolution which is also quite simple and free…Quit Littering! People, this nasty habit has to stop. There are bins all over the place and if not, hold onto your garbage until you find one. The island is beginning to look like a beautiful flower being taken over by mealy bugs. Let’s take back our island from the rats, roaches, mosquitoes and stray dogs and cats…come on, it can be done.

Although I only mentioned a few common resolutions, I know that every year plenty more are made and not executed so if you are one of those always doing this here’s a simple tip, just take life one day at a time.

If you are spiritual, do the most important thing and build a closer relationship with the most high, God. Pray, pray and pray again. This, added to living a righteous life, you’re sure to be on the right path. If spirituality is not your thing, just treat others the way you want to be treated at all times and you surely won’t go wrong there either.

Life is so short and can be snuffed out quicker that the blink of an eye so unless you have a will of steel to set goals for yourself and stick to them then just try to live and live good this year.

As I end my first Sounding Off for the new year, I would like to take this opportunity to bid you readers a joyous and prosperous 2015 with endless love, blessings and success. Stay safe and Happy New Year to you all.