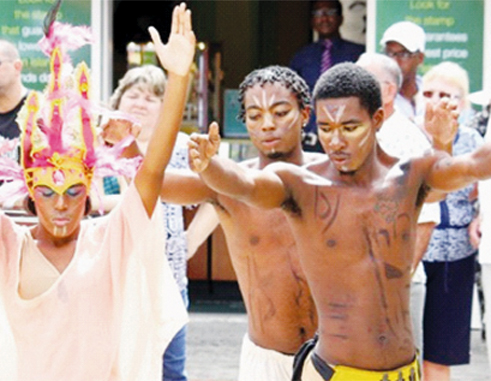 TWO-YEAR-OLD dance company, RADTp: Endedance, might be considered a fresh face on the local dance scene. But make no mistake about it – the group definitely has some killer moves that are worthy of standing ovations. But it’s a combination of the group’s rich talents and future plans for dance that speak loudly to RADTp: Endedance’s intention to revolutionize the dance landscape one poised step at a time.

Richard Ambrose is founder of RADTp: Endedance. Ambrose, a trained classical dancer whose superb moves elicit “oohs” and “ahhs” wherever he performs, says the acronym RADTp stands for Richard Ambrose Dance Theatre project. The group’s fundamental purpose, he tells me, is to create an artistic dance experience unlike any other by fusing traditional and modern dance forms.

“We’re basically trying to forward the idea of the creative arts in Saint Lucia, especially traditional performance,” Ambrose explains. “What we’re offering is an experience in Saint Lucian traditional dances as well as contemporary and modern styles. The dance company is here to teach people to dance or offer them a dance performance that they can use at a ceremony or any other event, such as birthdays, weddings and so on.”

The company might be relatively new. However, Ambrose reconciles that freshness with the fact that the Saint Lucian dance tradition has been alive for many years. He believes that with the group promoting not just its own talents, but also what many other Saint Lucians are doing in terms of traditional knowledge and contemporary theatre, augurs well for the group’s growth. The country, he says, is ready to be exported for what it has and what can be developed through dance. But there are some limitations to making even the most skillful dance moves leave a lasting impression, he admits.

“We have some peculiar challenges because what we’re trying to do is a service and when it comes to art and the performing arts, it’s temporal. After you’ve performed, people can basically forget what you did. So we’re trying to tap into other sources as well to promote this temporal art form. So we’re doing a little bit of photography and video. We’re also presenting some of our work for people to see,” Ambrose tells me.

Ambrose describes the dancer’s body in movement as a beautiful and artistic expression. Taking photos of that movement to make postcards is an idea the group is currently promoting. RADTp: Endedance, he says, is trying to show how dance can be used in other areas. In fact, when I caught up with the group at a recent trade exhibition, Ambrose’s dance crew was collaborating with some of the vendors at the exhibition by using their products in their dance acts. That gave them another idea about marketing their products as well as them inadvertently advertising their business, he says.

RADTp: Endedance consists of 10 regular members. Despite the dancing profession not being that established in Saint Lucia, Ambrose says a lot of young people are continuously getting into it, including his group. Sometimes, he says, their expectations of a full-time job in the art form are dashed since Saint Lucia’s creative industry is still in its blooming stage. Nevertheless, they keep on dancing.

“So they end up going into other fields but are still kind of there with the company, recognizing that they need to train and master their art-form so as to be able to offer something to the public that is consuming your product,” Ambrose says.

In their first year of performing in the National Arts Festival nearly two years ago, RADTp: Endedance didn’t actually capture any awards. However, what they got was some great feedback from people who loved what they were doing because it was different. The group focused on some elements of our traditional dance that needed to get on stage, such as engaging the audience in showing the joie de vivre of life and not simply the morose moments. It also sought to bring new creativity to the stage in terms of costuming and body painting. It’s all part of the act, Ambrose assures me, to reach back.

“I think dance is very important if we just look at where we came from — our African heritage and African way of life. Dance is an inherent part of that heritage and way of life. Just the way we move when we walk down the street and interact with each other using gestures and so on are part of our lives. The scientific definition of dance needs to become curtailed and I think that’s why our exhibitions are a little different from everybody else’s because we’re defining dance as a product that can be exported,” Ambrose explains, somewhat philosophically.

Some of the dance forms the RADTp: Endedance crew breaks into from time to time include the widova, polka and the waltz, which are dances that people – even if they don’t necessarily know the names – are able to identify the steps. The group also uses some of the other folk dances, such as the katumba and belair, as well as forms that many young people are starting to identify with, such as the pop and lock, the bone-breaking and dancehall. Ambrose says the group is starting to mix things up a little bit to offer variety in addition to some of its members’ training in classical ballet and modern dance. Keeping the moves fresh while adding a few traditional steps, he believes, is a surefire way of keeping the dancing spirit alive and moving.

“In the Caribbean, we’re known to be a cutting edge and innovative people. So it’s all in keeping with this idea of us showing the world who we are, what we’ve been doing and what we’ve mastered. We have a lot of people in the community who know the folk songs and dances. The fear is that the knowledge might be lost, so we need to start getting it out there and passing it on to the next generation and other people who might have an interest in who we are,” Ambrose tells me.