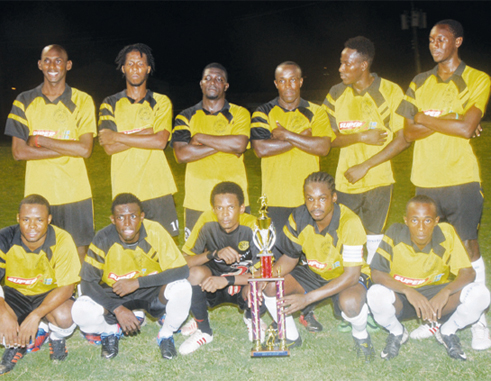 DESPITE persistent rain over the two days of football in the 2014 Veterans Tournament held at the Soufriere Mini Stadium this past weekend, Member of Parliament for Soufriere Harold Dalson braved the inclement weather to be there.

The MP spoke to the VOICE in an exclusive interview regarding his plans for sports in the western town. He also thank the organizers Veteran’s Sports Inc for taking the tournament to Soufriere.

He said: “Soufriere is gradually becoming the meeca of football in St.Lucia and that augurs well for the community, because the spin off from the games will only redound to benefit the vendors who come around and sell their various products, even some of the guest houses in town are benefitting from it.

“This mini stadium is work in progress It is not finished. We have to fence it entirely with proper fencing so we can remove the cloth material presently on the outer fencing. It’s my intention to not only use it for football and cricket, but to bring back some of the traditional sports like track and field and make it a popular event in Soufriere”, he noted

Dalson continued, “The plans are ongoing. Who knows by 2017 when St.Lucia will be ready for the Commonwealth Youth Games probably we may have proper running tracks on this facility. Also I am anticipating this facility will be used quite a bit for the CYG”.

The Soufriere MP said, “I am very happy we invested in this facility and it’s paying dividends right now”.

VOICE: Any plans for the playing field in town known as Old Trafford? His reply was, “Yes, there are plans for that facility, and once again its’ just consultation going on right now through the BNTF programme; we are looking at the possibility of putting a bus terminal.

“The Soufriere town is also congested and we hope we can have a hub where all the buses will begin their trips from one area and at the same time remove the vendors who are vending from the various street corners. This is very unsightly. We will try to have them in one general area and create a kind of market atmosphere in that area, it’s work in progress”.

VOICE: You recently opened a multipurpose court in the Fond St. Jacques community what is next for the town in teams of courts and sports development?

Dalson said Soufriere has a very youthful population and we have to cater for their needs; and sports is an avenue they can utilize.

The MP added: “There is a basketball court in town which needs some renovation. Come 2015 we will do some upgrading, but generally we have two good facilities. There is absolutely no reason why we cannot play basketball and netball tournaments in Fond St. Jacques”.

He continued, “Earlier I spoke with some netballers from that community and they are now in the process of organizing a netball tournament and the plan is to invite a few teams from town to participate and that will augur well for Fond St. Jacques.”

The MP’s trip to the mini stadium to support the Soufriere team was rewarding as the home team decked in their customary yellow and blue attire, went on to defeat Laborie 2 – 1.