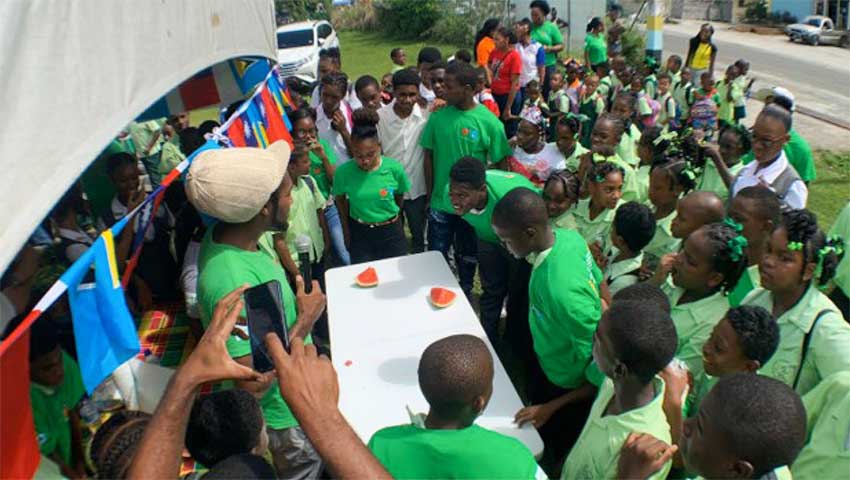 THE Taiwan Technical Mission together with the Ministry of Agriculture, Fisheries, Physical Planning, Natural Resources and Co-operatives hosted the first Farmer’s Market of 2020 in Dennery at the Agricultural Extension office located opposite Valton Hardware. The event which happened on Wednesday 29th January 2020 began at 8 a.m. and ended at 6 p.m. and it was a big success for both local community and farmers.

There were farmers from all over the region who came to sell their produce. Many farmers brought fruits and vegetables like lettuce, watermelon, cantaloupe, honeydew, plantains, citrus and many other root crops. There were also persons who sold vegan cakes and baked goods, ice cream, sorbets, local wines and honey. The highlight of the event showcased the Clendon Mason Secondary school who made and distributed unique goods produced by the students. The Food and Nutrition students, together with Mrs Ram made creative dishes such as watermelon, lemonade, and pineapple upside down cake, cabbage spring rolls, lettuce tacos, pineapple jam drops, and chocolate covered fruits. The students enjoyed the event and were able to attract a large crowd of persons to patronize their booth. The school and other students also came to the Farmer’s Market to show their support and school spirit.

In addition to the sale of goods, the Ministry of Health also provided the residents of Dennery with free blood pressure testing, blood sugar testing and weight monitoring. Many persons were able to come and get their health checked by these means. They were then given advice on how to improve or maintain a healthy lifestyle going forward.

The event also attracted the attention of the Communications Unit at the Ministry of Agriculture and they went around interviewing several participants of the Farmer’s Market including the Project Coordinator, Taiwanese volunteers, farmers and students. The interviews which were conducted brings awareness to the project will soon be aired on local television.

Additionally, the Farmer’s Market had two watermelon eating competitions with one round of Primary School students and another with a round of Secondary School Students. The winners were awarded selected fruits as a reward for first place. All participants in the competition were also awarded t-shirts. Farmers who participated in the Farmer’s Market also received prizes for being the earliest and most productive participants. Each of the farmers also expressed their appreciation for the event and their willingness to attend future markets.

The next Farmer’s Market will be held at the Constitution Park on Friday 28th February.