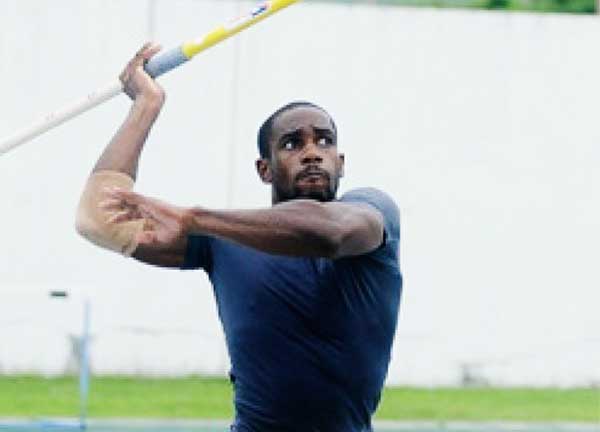 THREE time Olympian (2008, 2012, 2016) and world-ranked high jumper Levern Spencer and national record holder and bronze medallist at the Pan American Games in Lima, Peru javelin thrower Albert Reynolds, were among athletes honoured by the Saint Lucia Athletic Association (SLAA) on Saturday evening at the Saint Lucia Olympic Headquarters in La Clery. The annual awards ceremony of the SLAA was held under the theme, “Driven by Purpose, Thriving on Excellence”.

On the night, the other two athletes receiving recognition were junior male Jaheim Ferdinand and junior female Julien Alfred who dominated their events during the 2019 season.

In front of a small gathering in the coziness of the SLOC walls, in attendance were the President of the SLAA – Cornelius Breen and his entire executive; SLOC General Secretary – Alfred Emmanuel, Permanent Secretary in the Ministry of Youth Development and Sports – Benson Emile, Sports Director – Patrick Mathurin, Chief Education Officer – Fiona Mayer, awardees, specially invited guests to include parents and members of the media.

Junior Female Athlete of the Year Julien Alfred won 2 gold medals, 4 silver and 2 bronze in competitions for her school Texas Longhorns. Having started the year with an 11.83 seconds time in the 100 metres, she ended it with 11.21 seconds shaving off .62 seconds within the year in that event.

In the 60 metres she broke the National Indoor Record three times. Her performance of 7.18 seconds in December was not only a National Record but also the second fastest of all times in the NCAA Division 1 across the distance. This performance was also the fifth-fastest 60-metre sprint in Texas history.

Alfred attained the standard necessary to participate in the 100 and 200 metres at the IAAF World Championship in October, but due to injury had to withdraw.

Senior Male Athlete of the Year, Albert had an outstanding year participating in local, regional and international championships. To this day he remains undefeated in local meets. In 2019, Albert saw his hard work and dedication pay off when he captured the bronze medal at the Pan Am Games in Lima, Peru with a throw of 82.19 metres. This throw not only eclipsed the National Record which he set earlier in February but made him the first male in over a decade after Dominic Johnson to win a Pan Am medal for Saint Lucia. 2019 also saw Albert represent Saint Lucia at the IAAF World Championship in Doha, Qatar where he came in 29th with a throw of 73.91 metres.

Senior Female Athlete of the Year Levern Spencer ensured that our flag continued to be flown across the world with her performances. Her gold medal at the Pan Am Games was inspiring and renewed the faith Saint Lucians have, as a small nation, in our national athletes. Her Pan Am gold medal performance was celebrated with a hero’s welcome at the Hewanorra International Airport in Vieux Fort.

Additionally, social media overflowed with acclamations for her after winning the gold medal and solidified national pride from the toddler to the aged population. This pride in Levern’s achievement resonated locally and regionally and this was clearly evident.

Levern closed off 2019 by winning 5 gold medals, 3 silver medals and 3 bronze medals; she successfully defended the Pan Am title which she won in 2014. She is now Ranked No. 1 in the OECS; Ranked No. 2 in the North America, Central American and the Caribbean region and Ranked No. 18th in the world.

In addressing the gathering, SLAA President Cornelius Breen said, “When we took office at the end of 2018 into 2019, one of our missions was to bring some stability in the way things were done and to setup committees to ensure and support the central executive in functioning properly. One such committee is that of the Technical Committee under the direction of Henry Bailey; he has been working to standardize our approaches to athlete development and how the sport is administered on the island. Under their supervision, we currently have a jumps programme in tune with technical expertise of the Cuban coaches on island”.

“On the administrative side, with the support of the Ministry of Youth Development and Sports, we secured the services of two youth ambassadors. They currently serve as a statistician and PRO coordinator. We are also hopeful that the position of administrative officer/secretary will be filled to provide much needed relief and direction to the organization. We are of the firm belief that the sport has developed to the extent where we are thinking along the lines of employing full time staff. In order for it to become a reality, we have been cranking the figures and exploring avenues as to how we can finally make this happen. Anyone willing to partner with us in this gesture will be greatly appreciated”.

Breen thanked the many sponsors who supported the SLAA during 2019: He said, “Your contributions have gone a long way to make the dreams of some of our athletes become a reality; for this we say thank you and we look forward to your continued support as we take another step in the turbulent waters of 2020. I say turbulent waters because 2019 wasn’t easy and the projection for 2020 is looking even tougher. Our total expenditure in 2019 was in excess of $254,000.00. It is with this in mind that we are working to tighten on our games operations in order to attract and keep sponsors”.

“In 2020 much is promised as well as much is expected. We the executive of the SLAA are determined to make some of the necessary changes required to ensure our sport continues to bring our flag in the spotlight when we go out to represent. It’s an Olympic year and many of our athletes are trying to make it to Tokyo and we wish everyone the best of luck.

“As we continue our journey of change in 2020, we will see the enactment of a new SLAA constitution which has been long overdue. Attention will be placed on training for technical officials as well as our coaches, and on athlete development.

“Our talent identification programme will also commence this year so come 2021 for CARIFTA Games, our numbers and performance will be much improved. These are just some of the focus areas for 2020,” he noted.