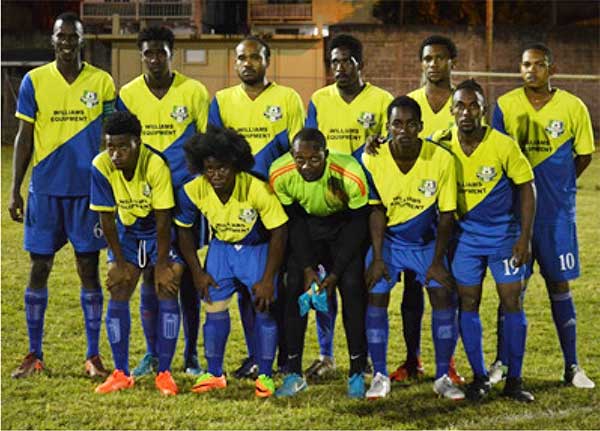 FROM 6.00 p.m. today (November 2) in the first encounter of this weekend’s Island Cup sponsored by the Saint Lucia Football Association (SLFA) Inc. and the National Lotteries Authority (NLA), Canaries will go up against Dennery at the Marchand Grounds.

In the second match of the evening, Island Cup defending champion Marchand with 6 points under their belt will take on the 2019 Blackheart Production Super 8 Champion team Gros Islet on 9 points at 8.00 p.m.

According to Desir, “We have not played Marchand in two years; at present they are in a good run on form.”

Despite the non-availability of some players for the match, Desir commented, “Gros Islet is still a big threat to Marchand with our present squad; these players, except Tel Lawerence, were not in the starting eleven. The last game against Central Castries we were 1 – 0 down. We came back fighting to win 3-2. Players like Eden Charles is in great form scoring two goals, Amaris Lorde has his touch back; our defense was a bit tighter in the last game, and we missed out on Charlery Mathurin (central defense). He will be back to play against Marchand.”

He continued, “In terms of our starting eleven, we are only short of one player, Tel Lawerence. We should be able to get through Marchand with at least nothing less than a draw or a win based on our present form. Our goalkeeper and captain Giovanni Deterville will be back between the uprights. Marchand have to come good; not the way they played against Vieux Fort South last weekend with no substitute on the bench.”

The VOICE also spoke to the President of the Marchand Football League, Christopher Clarke about this evening’s encounter.

“Our last meeting with Gros Islet was two years ago in the Blackheart tournament, third place game. Gros Islet won 4-2. Gros Islet is probably is the most in-form team in the tournament right now and plays a fast paced game with lots of movement of players.”

According to Clarke, “Marchand must remain focused from whistle to whistle. We need to play our game, not letting Gros Islet dictate the pace and once we can control and win the different moments in the game, especially defensively, and upset the flow of their attack, the result will be favourable.”

“We expect to see the return of our goalkeeper Shem Dornelly between the uprights, likewise our prolific goal scorer Lincoln Phillip in the thick of thing,” he noted.

On Sunday 3rd, the showpiece continues with another double header; from 6.00 p.m. Mabouya Valley currently on 6 points plays Central Castries who currently is at the bottom of the table with 0 points.

At 8.00 p.m. the 2019 Blackheart Knockout champions Vieux Fort South with 3 points will look to make amends after two consecutive defeats at the hands of Gros Islet and Marchand, they will come up against Roseau Valley at 8.00 p.m.

To date the leading goal scorers are Tev Lawrence with 9, followed by Wilson Charlemagne and Brandon Modeste with 5 each.