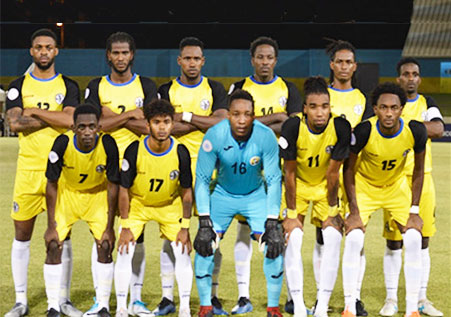 BELIEVE it or not, the Island of Montserrat has qualified for the 2021 CONCACAF Gold Cup playoffs after an impressive 1 – 0 win over host Saint Lucia in Group B of League B of the 2019 -2020 CONCACAF Nations League on Tuesday evening at the Darren Sammy Cricket Ground (DSCG).

In front of a crowd of about 1000 patrons, the home team would have been disappointed with themselves for not putting away numerous scoring opportunities at either end of the pitch.

Tuesday evening result means that Montserrat has taken over the Dominican Republic into second place in Group B.

The home team had two scoring chances inside the 12th minute through No. 9 Antonio Joseph, but he was unable to put Saint Lucia ahead.

Montserrat at the time had at least 65 percent of ball possession. Their efforts paid off in the 35th minute when a cross from No. 5 Joseph Taylor (defender) from right flank to No. 19 Nathan Pond (defender) who headed past the Saint Lucia goalkeeper No. 16 Lamar Joseph into the goal. In spite Saint Lucia’s efforts in trying to equalize the visitors went in at the halftime whistle with a slim 1 -0 advantage.

On the resumption, Saint Lucia had another chance of scoring in the 71st minute when No. 7 Jevick McFarlane (forward), failed to find his target as the ball went over the cross bar.

With ten minutes of regulation time left, the Montserratians threw everything that they had at the Saint Lucian defense, but failed to score.

Inside the 89th minute, Saint Lucia had another opportunity to equalize, when No. 13 Kieran Monlouis’s gallant effort inside the 40 yard area, found an alert No.1 Corrin Brooks (goalkeeper) in perfect position with no difficulties between the uprights.

In a post-match interview, Montserrat’s head coach, Willi Donachie spoke to the media about his team’s performance on the night. This was what he had to say.

“It’s a fantastic achievement by our players; with all due respect Saint Lucia has a very good infrastructure for its young players. The Montserrat players all play in the lower league in England, they have shown unbelievable character and they deserve this so much, they play for the love of the game, not the money and fame, so I am really happy for them”.

What was the biggest moment of the campaign?

“ This, it’s a great result when we needed it after losing to El Salvador in the 90+ minutes, emotionally it took its toll and to come back from that and to win in Saint Lucia is a fantastic feeling, they showed real character”.

Jamaal Shabazz, head coach of the Saint Lucia team said, “I take full responsibility for the result, I thought the players gave 100 percent, at times you could see the experience and the maturity of the opponent how they try to manage the game. We created some chances in the early stages; I think we started to put our foot on the ball too long and that killed our rhythm”.

“When we are were moving the ball and trying to gain penetration we were a superior team for that aspect but the minute we started to hold the ball and slow the pace of the game, I thought they used their experience and went ahead. Throughout the second half we were playing catch up. I thought we threw everything at them, we just didn’t get the ball at the back of the nets and in situations like that when you play against a superior opponent more mature you have to score”.

“This is one of the things that differentiate our team from all the teams in Group B, Montserrat had a hard game against El Salvador, but they were able to recover physically better than us because they have available to them the techniques in terms of hydration and rehydration; these are aspects of the game fans are not interested in. It’s clear Montserrat was able to recover faster; you can see our two forwards were brilliant in the first game; they just did not have the energy after the 30 minutes. We changed some players because of these same recovery issues”.

“Eden Charles played his first game in this tournament and he gave a good account of himself; we can see depth developing in this team and players being able to come in having not played and giving a good account. Blows that don’t break the back do strengthen it. I think the blows today will not break our backs”.

“It’s a bitter pill for us to swallow as we finish last in the Group; we got to face the reality; we got a good dose of reality and if I have to take and shoulder the responsibility and say look it was my fault maybe I need to go, I would do that”.

“I could see progress from where we were to where we are now and I could see the depth in the team improving. What I think we need to do is to get more players outside of Saint Lucia to play at a higher level and when they come in they bring a level of maturity as we saw with the Montserrat team”

In the other match played on the evening in El Salvador, the Dominican Republic went down to El Salvador 2 – 0 to finish third. El Salvador moves on to the CONCACAF Cup