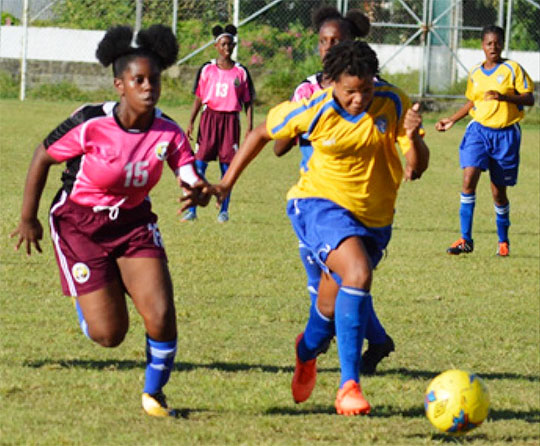 ONE game was on the cards in the Saint Lucia Football Association Women’s Under 23 Football Tournament played at the Marchand Ground on Saturday 26th October 2019.

For the National Under 14s it was the first time in action on home soil following their recent exploits in the Caribbean Football Union (CFU) Under 14 Football Tournament in the Cayman Islands. During that tournament they played Curacao, Barbados and host Cayman Islands.

Their opponent this time around in the SLFA tournament was a strong Canaries team that boasts eleven national players. The defeat at the hands of Canaries, decked in the customary yellow and blue attire, does not reflect how well the national Under 14 team played on the day.

For Canaries, No. 14 Janell Mathurin opened the scoring in the 29th minute to give them the advantage at the halftime whistle.

On the resumption No. 12, Cassandra Shepherd put Canaries further ahead in the 55th minute and despite a number of surges and scoring opportunities, the score line remained 2-0 in favour of Canaries at the end of regulation time of referee Lesroy Joseph.

“We lost to a more superior team, the girls gave a good account of themselves and all credit to Canaries, they played a better game and they scored their goals and they took their chances as well,” said Head Coach for the National Under14s, Denis Didier following the encounter.

Didier said irrespective of the fact that they had lost, the team held their own; he made special mention of goalkeeper No. 1, Fostina James, who made a few saves between the uprights; the two central defenders, No.15 Shaniya Scott, No. 8 Sabrina Avril and midfielder player No. 9 Arnicka Louis.

According to Didier, the technical staff will go back to the drawing board to see where the team made the mistakes and to improve on the weak areas leading to this weekend’s game against Roseau/Anse la Raye Combined at the Sab Sporting Facility.

It must be noted, this was the first time a mother and daughter played alongside each other in a SLFA tournament representing Canaries. Shenelle Francis (mother) – Team Coach and Kenala Francis – Goalkeeper.