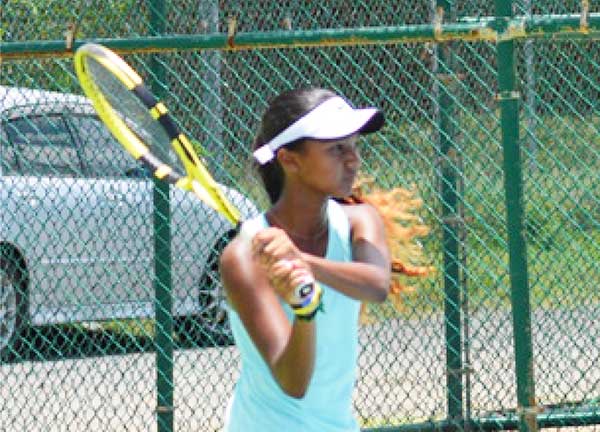 IT’S the final day of competition today (Thursday 15th August 2019) in the International Tennis Federation (ITF) and the Confederation of Tennis of Central America and the Caribbean (COTECC) Under 12 and Under 14 Development Tennis Tournament being held at the National Tennis Centre (NTC) in Beausejour, Gros Islet.

The tournament is sponsored by Sagicor in collaboration with the Saint Lucia Tennis Association.

So far with one rain interruption (Sunday 11th) conditions have been superb throughout, but according to the local Meteorological Office, a few showers are expected by mid-morning, with conditions expected to improve as the day goes along.

By all indications, the final day of competition will be exciting based on the remaining matches on the cards.

Meanwhile, it was tough going for Saint Lucia’s Boys and Girls on Day 4 at the NTC on Tuesday 13th August.

The highlight of the mid-morning showpiece took place on Court No.1 between the tournament No.1 ranked female player Rasario Elmudesi (Dominica Republic) and Cameron Wong (Trinidad and Tobago). Elmudesi took the first set 4-6. Wong came back strong to win the second set 7-5 with a series of rallies and some powerful spanking shots down the line.

With all to play for and a semifinal spot up for grabs, the parents of both players were sitting alongside each other cheering the two young ladies on centre court Despite the scorching heat at the NTC, the two players went at each other, but in the end Elmudesi surrendered 6 – 2 to Wong in the third set.

Wong was scheduled to play Brasha Dyer (Antigua and Barbuda) in one of the semifinal match ups.