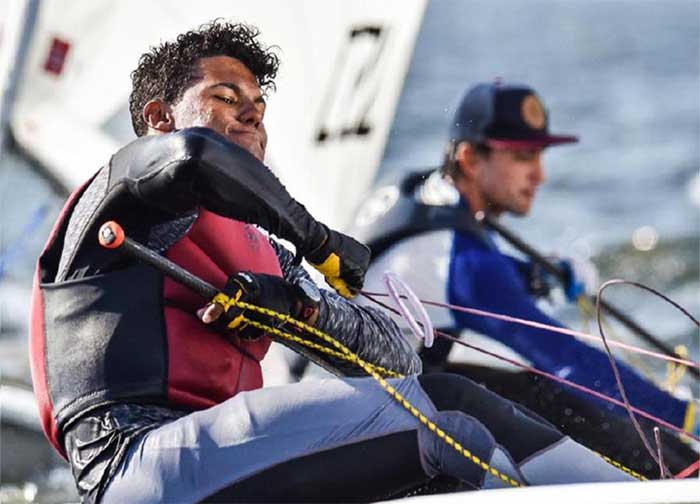 The wait is over! Two St Lucians will literally test the waters while competing at the 2019 Pan American Games in Lima, Peru. Sailors Stephanie Devaux Lovell and Luc Chevrier will compete in sailing today (Saturday 3rd August) at Bahia De Paracas-Pisco.

Chevrier and Devaux Lovell spent a great deal of their time away from the Games Village and instead, were stationed at Bahhia De Paracas-Pisco getting acquainted with the surroundings due to the fact that the sailing competition is a five hour drive from the capital.

Christopher says he is pleased with their progress stating that “the two sailors have been going through their paces working out in the morning and midday so they can be well prepared when the competition starts.”

Minister of Youth Development and Sports, Edmund Estephane who attended a football game for reasons other than entertainment said he was impressed with the stadium and couldn’t help but notice some of the similarities (on a smaller scale of course), with the current plans for the Soufriere Mini Stadium.

“The stadium there will look somewhat like this. Our surface will be very similar to this one with artificial turf and a track around the field,” he said, noting in a previous interview that his main purpose in Peru was to support Saint Lucian athletes and to show them that we care about their achievements.

When asked what are his hopes and expectations for Team Saint Lucia at the Pan American Games he replied. “We know we have a champion in Levern Spencer who is going to be competing here. We pray to God that all goes well and that the weather is very accommodating to her and the rest of our athletes. At these Games we can only hope that our athletes give of their very best. A lot of things have to come into play for that to happen. Our support system has to be intact. Peru’s climate is not like St Lucia’s and some of our athletes maybe experiencing this kind of weather for the very first time.”

Chevrier and Lovell are St Lucia’s earliest arrivals at the Games. The rest of the team which includes Spencer and JeanelleScheper (both high jumpers), Albert Reynolds (javelin), Sandisha Antoine (triple jump) and Jean Luc Zephir swimming will arrive in Lima early next week.

Zephir competes on August 6th, while Spencer, Scheper and Antoine compete in their various events when athletics takes place from August 7-10.