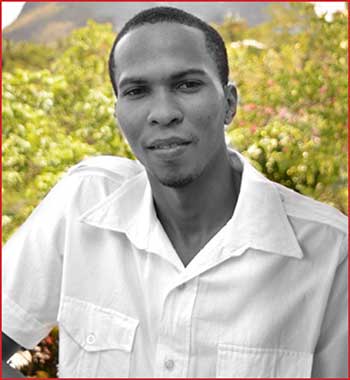 Ron Henry also had a sold out auction and exhibition at Saint Lucia’s High Commission in the UK. More recently in 2019, Ron exhibited work with TEPA at Saint Lucia’s High Commission in America. Ron Henry is undoubtedly an artist with universal appeal. His talent was noticed by teachers at elementary school as they flipped through the pages of his notebook. What his teachers discovered then, was enough to fill them with confidence that Ron will become an artistic success.

Ron’s talent was continually nurtured from the moment it was discovered as teachers encouraged him to participate in competitions which he went on to win. The encouragement paid off when Ron received the Outstanding Youth in Visual Arts award from the Choiseul Youth and Sports Council in 2013, and an award from the Choiseul Independence Committee for contribution to the Create Arts in the same year.

One of Ron’s proudest achievements was the selection of his artwork to represent Saint Lucia at the 2013 Carifesta Regional Art exhibition. Ron’s goal is expressed in his portfolio which is to “become a prolific Saint Lucian artist, who seeks to create art that is relatable and inspiring, while conveying a sense of joy to others through his favourite language, painting.”

In an interview with The Voice Newspaper, when Ron was asked if he could be anything other than an artist, what would it be? He responded, “There’s no other profession out there that has come close to the satisfaction, freedom of expression and growth I get when creating art.”

Surely… this is the response of an artist whose passion for art fills him entirely. Ron’s philosophy on art is a reflection of his profoundness of thought. Ron was asked, “If a colour had to be removed from creation, and it was up to you to decide what that colour should be… what colour would you choose?”

Ron replied, “All colours are important in the process of creation, to create depth, mood, and other cool effects. Taking out one colour from creation… if I was given the option would put this beautiful world of variety we know out of balance and that’s an option I would not take.”

Ron is eternally grateful to everyone who has taken an interest in his work. He remarked, “All my paintings are to share with the world at large. When a patron purchases my work it gives me great joy in knowing that this person values my work and that my art will be integrated into their lives and be an infinite source of inspiration and happiness to them.” Ron’s career has been inspired by both local and international artists. The local artists who have inspired and aided Ron were Jallim Eudovic, Jonathan gladding, Christopher Cox, and Luigi St Omer. International inspiration for Ron came from artists such as Dru Blair; Scott Bartner; Adolphe William Bouguereau; James Gurney; the 16th century artist, Tintoretto and the 17th century artist, Gian Lorenzo Bernini. Ron Henry has been moved by inspiration which has spanned across centuries.

Notwithstanding all the talent of the aforementioned artists, Ron’s greatest inspiration has been his own dear mother. When Ron was asked if there was any artwork that he would never wish to part from, he responded, “The only painting in my private collection I would not like to part with is a portrait of my ever supportive mom. Especially when I decided to be an artist in a country where artists (painters) haven’t got the best support and respect they deserve. But unfortunately she passed in the year 2014. Keeping her portrait close reminds me that she would not want me to give up on being a success, a positive role model to other artists, and one that made great contributions to the arts and to see that artists are treated fairly and respectfully in their profession.”