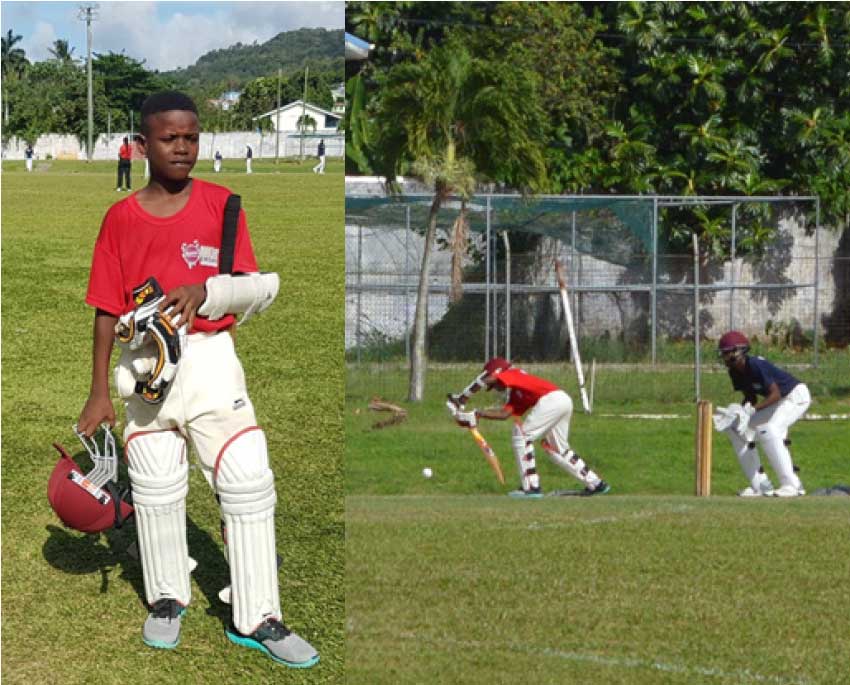 A young cricketer has become the latest sensation in sports in Saint Lucia; standing just over a metre tall Theo Edward made his way out to bat at No.8 last weekend for the Mabouya Valley versus Central Castries quarter final match in the Sandals Under-19 cricket tournament.

Though he did not trouble the scorers at the Mindoo Phillip Park as he was out caught off the bowling of Keegan Arnold for 1, the 11-year-old had the support of the usual parents who turn out to lend support and encourage their sons whenever Central Castries is playing.

His height, size and approach as he went out to the crease spoke volumes; like a young man on a mission at such an early age, many agreed that to display that type of professionalism was a beacon of hope proving that the cricketing well is in fact overflowing with talent.

Young Theo is under the watchful eyes of Head Coach – Clivus Jules.

Edward spoke to The VOICE about his involvement in the sport and how far he would like to go playing cricket.

“I attend the Labayee SDA Primary School, and I want to be a West Indies cricket player,” he said. “My favourite cricketer is former West Indies hard hitting batsman, Johnson Charles.”

When asked why Johnson was his favourite, he expressed: “He hits the ball hard and scores very quickly.”

By all indications, cricket is his passion. Edward is an upcoming all-rounder. He is a right hand lower order batsman and bowls right arm off spin.

His father, Cassius Edward, is simply a cricket fan, but also assists in the transportation of the team. Edward encourages his son to play the game with due respect to the opposition, officials, and proper adherence to the rules of the game.

Theo attributed his first year of success to his parents Carlyn and Cassius Edward who he said have ensured he never misses out on a training session.

“Without my parents’ support I wouldn’t have been able to be where I am today in my game,” he said. “They have provided me with support at every level, and they have never said no when I requested permission to go training or games.”

In terms of this year’s Sandals Under-19 tournament, Edward said, “The tournament is exciting and well organised. I also get to meet different players from the various teams.

Young Edward had some advice for the young players coming up on the horizon. “Stay and bat and defend your wicket; and when you’re out on the field make sure you have your body behind the ball.”

The VOICE also spoke to Theo’s dad, Cassius Edward. Interestingly there was quite a bit of humour as he described how it all started for Theo.

He said, “From the time Theo was about 6 years old, he started destroying everything in the house, from the refrigerator to glass, you name it. When I realised what was happening and being involved in cricket, I decided that getting him involved would be an investment for me. I made up my mind that I would do all it took to help him to excel in the game.”

He added: “I have seen a great improvement in him. I will not back down; neither will I allow him to give up. He is now preparing for Common Entrance so he will have to take some time off, but as soon as Common Entrance is over, its full-time cricket for him.”

Meanwhile, Theo’s coach, Clivus Jules had this to say about the young man with a big future ahead. “He is a very promising and dedicated young player. He loves to practice and play the game. One of the most intriguing things about him is that he is a good student of the game always willing to engage in a conversation about cricket, be it about a player from long before his era or from another part of the globe.

“Theo is always interested in the game of cricket. He has shown temperament beyond his years as a batsman. I can see a very bright future for him if his present love and passion for the game is sustained.”

The VOICE sports desk wishes Theo Edward all the best in his Common Entrance Examination next month.