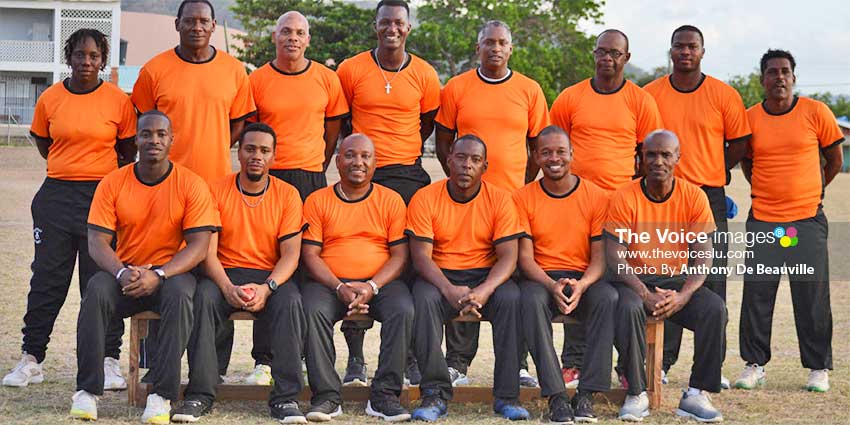 WELL if you missed it, blame yourself.

Last weekend’s cricket match up featuring Gros Islet Veterans and the Celebrity Team was exciting, to say the least.

Over 450 runs were scored in 38.4 Overs with three batsmen scoring half centuries. The encounter was none other than the Honourable Lenard ‘Spider’ Montoute’s Celebrity Match between Gros Islet Veterans and the Celebrity Team. The event lived up to the hype at the Gros Islet Playing Field on Sunday evening in front of an appreciative crowd.

The Veterans won the toss and decided to take first knock scoring 227 for the loss of 4 wickets in their allotted 20 overs with opening batsman Jose Fedee, the brother of Tourism Minister Dominic Fedee and former Saint Lucia middle order batsman Sergio Fedee top scoring with 53. Nobert Charles, a former Gros Islet player in years gone by made 33, while Allian Ashby scored 28 not out. National Under-19 player Jard Goodman chipped in with 19, with former national/ Windward Island player Alton Crafton scoring 18 and Ricky Mc Doom, 11.

Requiring 228 for victory, the Celebrity Team saw, for the first time, Johnson Charles and Julian Charles opening the batting. Julian Charles did not last too long at the wicket. Attacking half centuries (81) from Johnson Charles (retired) and John Eugene, a former national/ West Indies top order batsman, 63 before he also retired, entertained patrons with some great cricketing shots to all parts of the field, as they guided the Celebrity Team to a comfortable 6 wicket victory, finishing on 234 for 4 in the 19th over.

Other useful contributions came from Kenson Casimir, Television/Radio sports host with 20 before he retired, and QianaJospeh 17 (retired). Much was expected from Kendal ‘Scady’ Eugene with the bat, but he did not trouble the scorers (0); but must be commended for his wonderful catch on the deep long leg boundary.

Hon Lenard Montoute coming in at No. 4 in the batting line up for his Celebrity Team was dismissed for 2 runs as he attempted to clear the leg side field.

Meanwhile, former West Indies player/captain, Daren Sammy who was also part of the showpiece on Sunday spoke to The VOICE ahead of the match.

“It’s always good for the community to get a chance to see the players who represented the community over the years and for players who are also well known to the public in various professions to come out and showcase their talent,” he said. “It’s all fun and games but I will try not to get put out by any of the Veteran players because I will not hear the last of it! I will be on my ‘A’ game for sure.”

He added, “I should also warn the Veterans that Kenson Casimir at one time was a mean fast bowler, so whoever is coming out to bat should wear all their protective gear because we don’t want any injuries!”

With the Hero Caribbean Premiere League T20 Draft set for Wednesday 22nd, it’s anyone’s guess who the Stars will be taking in.

“It will be interesting to see who the Saint Lucia Stars will get,” Sammy said. “If we are lucky, we should be able to get some decent players. We have had decent players in the past, but we have not been able to reach the finals, or even win the tournament. This is the sixth edition, hopefully this year we can put it together.”

Sammy added, “From my understanding we have a new coach and they are putting things in place to put a good squad together. Hopefully the Draft goes according to how we want it, and the players selected are available fully.”

Will Daren Sammy make it back to the helm of the Saint Lucia Stars?

“Well there is the possibility…” Sammy said. “I guess the Franchise will decide who is going to captain the side. Captain or not, whichever Franchise I play for, I always play a leadership role.”