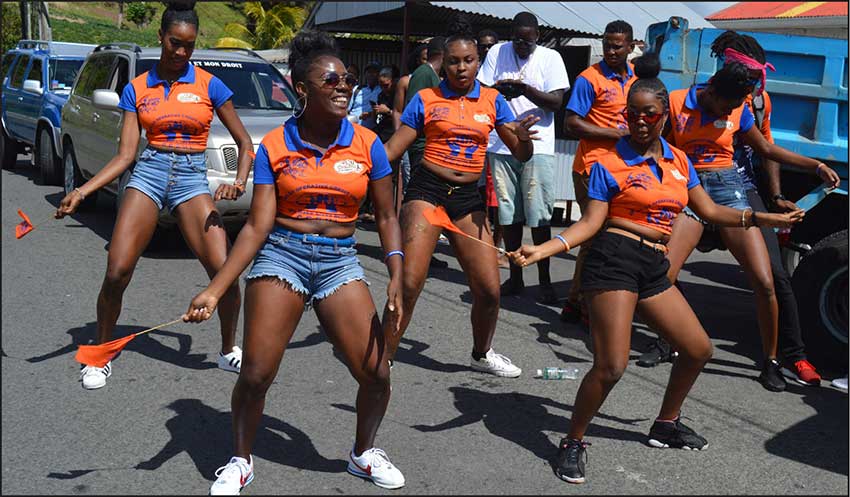 Grabbing onto the Choiseul Credit Union theme “We make lives better,” the Choiseul Craftmasters SPL T20 cricket team blasted its way from the blocks this past weekend with a road show throughout the Choiseul community.

With exactly one month to go before the commencement of this year’s tournament, the Craftmasters have left no stone unturned by involving members of the community to rally behind them in order to win this year’s tournament. Decked in their customary orange and blue polo shirts, the cheerleaders and players alike danced along to tunes from high powered music systems at various stops along the designated route accompanied by members of the Royal Saint Lucia Police Force (Choiseul Unit).

The VOICE spoke to Jonathan Chalon, Team Manager of Choiseul Craftmasters, who said one of the pillars of the Choiseul Credit Union is community involvement, and this year is no exception.

“CCU has come on board to support the young men in our community and to give them an opportunity to participate in this year’s SPL T20 tournament,” he said. “The Choiseul Credit Union is the franchise of the Choiseul Craftmasters cricket team.”

He added: “We have a group of disciplined young men who make it their duty to train on a daily basis, and when given the opportunity they go all out and perform at a very high level. A few of the players have represented Saint Lucia and the Windward Islands teams in the past and we are very proud of them. CCU continues to support sports and youth development in the community.

In terms of the composition of the team, he said, “We look to bring a balance. We have been grooming some young players for the future, and we believe the SPL is the right avenue to groom that cadre of players. From the Under-15 level we included them in the squad so they can grow and understand how to become professionals.

“We also have a few experienced players such as Audi Alexander who captained the Saint Lucia Senior Men’s team at the recently held Windward Islands Cricket Tournament, Jason Simon (wicketkeeper), Junior Henry, Vince Smith, Yohan Williams (Head Coach), and one of the pioneers who is still working with Craftmasters as a Consultant who had the vision for the team, Dave Albert.”

If you didn’t know well now you know; three things people from Choiseul love the most – cricket, barbeque and Western music. According to Chalon, the CCU realizes that and they are looking to partner some of their brands with the players who are on board with them this year. These players have a certain name recognition and face and they are going to be a face of some of their products.

He said, “Our Education Savings Plan is being promoted by Skye Laffieulle, so we are encouraging parents and young people to invest in their future as education and sports go hand in hand. CCU also realizes sports is a powerful vehicle for self-development and the Choiseul Craftmasters will continue to push that theme.”

Since the emergence of the CCM on the scene and with no organized cricket in Choiseul for some time, the SPL T20 has given them the impetus to revive the local tournament.

Chalon said, “This year our theme is “It’s the Journey to Victory”.” It’s a process and we understand it takes time to build a championship team. Two years we made it to the semifinal round and then to the finals and got knockout. We have not been able to cross that hurdle. In 2019, we believe it’s our year; we have the right crop of players, the right coaches and the right management to bring Choiseul Craftmasters all the way. They are focused and ready.”

“Some of our players have been performing in the Mon Repos T20 League and the Choiseul League. We have two centuries from our players to date. Junior Henry scored 127 on debut for Saint Lucia at the recently held Windward Islands Senior Men’s tournament in Saint Vincent and the Grenadines. They are motivated, pumped, and ready for action. It’s the Journey to Victory, and at the end, Choiseul Craftmasters will lift that trophy this year.”