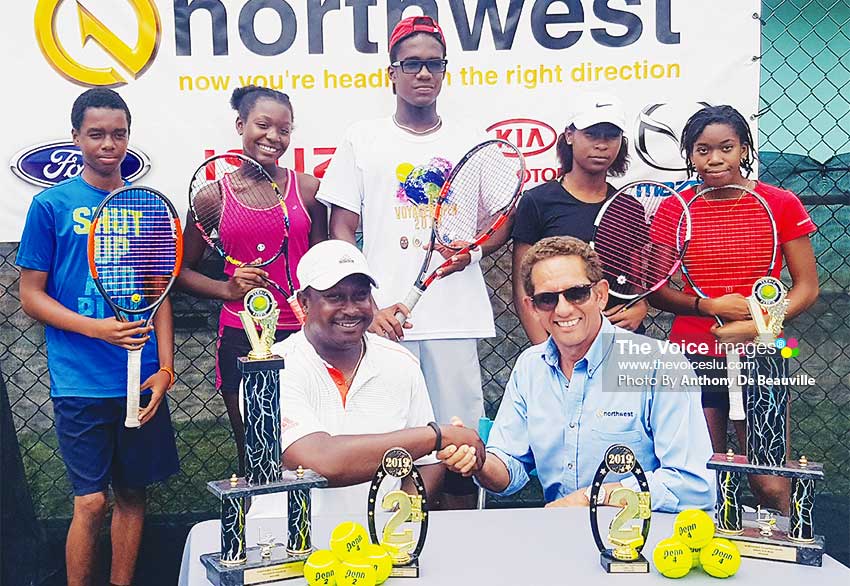 THE Kenneth ‘Wriggler’ King Sports Complex at George the V Park (The Gardens) will come alive as Tiger InFlow Academy in collaboration with main sponsor Northwest Limited will serve off its inaugural Tennis Tournament today (Thursday 14th March 2019) from 4.00 p.m. According to SirseanArlain, the man behind the scenes, the championship will attract over 100 players in eight categories.

The Tigers InFLOW Academy has partnered with Northwest Limited to bring to the Saint Lucian public the biggest tennis tournament ever to take place at the Kenneth ‘Wriggler’ King Sports Complex – the Tournament is sponsored to the tune of EC$8000.

At a press conference held at the Kenneth ‘Wriggler’ King Sports Complex at noon on Tuesday 12th March, Tournament organizer and former national player SirseanArlain said, “Hosting the inaugural Northwest tournament will be our biggest one ever held in the Gardens, because we are going to have so many junior players.”

On court 1 and 2 the organizers will stage a special developmental draw where close to 60 youth players from eight surrounding primary schools will make up the Red and Orange ball division.

Speaking on behalf of Northwest Limited was Larry Bain who is no stranger in sponsoring tennis tournaments on the Island. Bain said, “Northwest is excited and proud to be a part of this. We are looking forward to the excitement on the court.”

He continued, “Northwest has always been about youth development through sports and education and when Sirsean came to me and discussed his programme, tournaments and the things he had invested in at the Gardens with the youth players, it was a no brainer; we saw eye to eye pretty quickly.”

Bain took time out to make a special appeal to Saint Lucians to come out and support. He said, “There is nothing like public support that helps grow any initiative, particularly sports and the youth; the players want to feel that their efforts are being supported and appreciated. Tennis is a great sport… it’s a fabulous competitive sport and it’s a great builder of esteem and character.”

For the many tennis enthusiasts coming to take in the showpiece, they will see action in the various categories: Boys and Girls Red ball development; Boys and Girls Orange ball, Boys and Girls 10s, 12s, 14s, 16s, 18s, Men’s and Women’s Open and Veterans.

Six matches are on the cards for this evening: in Men’s Open: Peterson George takes on Corey Charles; while Netanya Faissal plays NadjemaMorille in the Women’s Open. The last time the two ladies played each other was at the Voyager Open with the latter (NadjemaMorille) having to retire due to injury. Both matches will serve off at 4.00 p.m.

The second and third Men’s Open clash will see Ronel Blanchard up against Kyle Anius and Joshua Jn Baptiste versus Anthony Habib. These matches will take place any time after 5.00 p.m.

To bring the curtains down on day one, in Women’s action, not before 6.15 p.m, Scyla Murray plays Jace Leon; and in the men’s category Thaddeus Emile versus Randolph Rosemond and Christopher Hunte up against Ricardo Francois.

The Tournament runs until Saturday 23rd March, but before the curtains come down the likes of Aviona Edmund (girls/women’s champion), Netanya Faissal (former champion), Maxx William (defending boy’s champion), Aiden Rosemond (under-14 boy’s champion), Petersen George and NadjemaMorille would have all participated at the Voyager Open. The Boys 18s and the Men’s Open, which is pretty solid, just looking at the draw; members of the public will be in a real treat on Court 1 and 2.