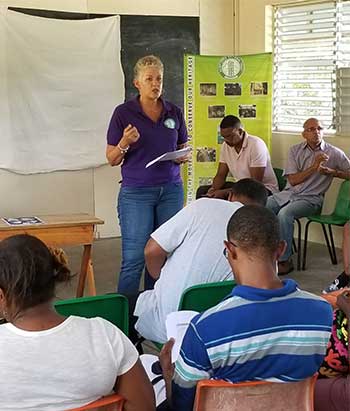 In a continued effort to stage its activities in various parts of the island, the Saint Lucia National Trust (SLNT) held its first Quarterly Membership Meeting for 2019 in the village of Laborie on Saturday, March 16th. Members were updated on projects including the proposed Dolphin Park. They had been informed by the government that Cabinet would be issuing a statement early in 2019. In that regard, the Secretariat had written to the authorities requesting updates to no avail, according to a press release issued by the SLNT.

“Members were also told that the cruise lines have expressed concerns about destinations with dolphin parks and it is hoped that the government will consider the related negative implications for cruise tourism in Saint Lucia when deciding on this project,” the release stated, adding that members at the meeting were advised that the organisation had been operating with a deficit budget primarily due to the removal of the subvention in 2017. “Whilst members moved a motion at the last Annual General Meeting to take the issue of the subvention to court, it was decided to make one more attempt to have the subvention reinstated before pursuing this matter in the courts.  Members were also informed that a suite of projects was submitted to the Prime Minister and the Minister of Tourism, as requested for government’s consideration.”

As part of the meeting, consultant Yves Renard presented the Strategic Plan Review. He indicated that based on interviews and a survey conducted with Trust members, the public and various agencies; it was revealed that while persons believed the Trust had undertaken many conservation projects, there was need for a new mandate to ensure the Trust was not “spreading itself too thin.”

According to Mr. Renard, “Following a series of consultations with members, Councillors, staff, partners and other interested individuals, this quarterly meeting provided a really good opportunity to present the main directions that the National Trust should consider over the next ten years. In particular, it confirmed the unique role of the Trust in preserving and promoting Saint Lucia’s natural and cultural patrimony and the need for greater attention to the built heritage. We can now proceed, with additional consultations, with the preparation of a full strategic plan.”

After the meeting, members enjoyed a brief tour of Ti-Tou, an enchanting beach in Laborie where they saw the ruins of a first generation sugar mill. Apart from taking in the beautiful scenery, members participated in a useful discussion on measures that can be taken to preserve the ruins which form part of the community’s rich historical (industrial) heritage. The SLNT thanks the Laborie Development Foundation for the facilitating the tour.