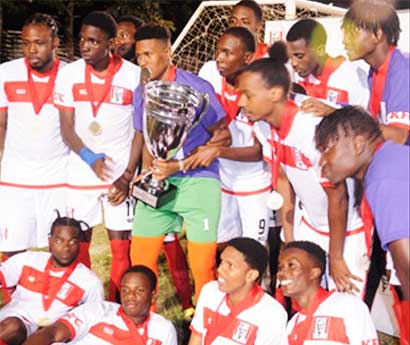 DOMINATORS are champions of the inaugural KFC/Gros Islet Football League Northern Zone Under- 23 Tournament, following a 2-0 victory over New Generation FC in the final played Sunday evening on the Gros Islet playing field.

Rohan Alphonse, who was mourning having attended funeral of his older brother, took his revenge on his opponents scoring two goals in the 33rd and 42nd minute of play to seal the victory for Dominators.

Like previous games in the tournament, New Generation FC failed to capitalize on the many scoring opportunities that came their way particularly in the second half of play.

Following the encounter on the pitch, Alphonse spoke to the media, “It was not a surprise that Dominators won. It was also no surprise that I scored, but you know it was a team effort.”

During the encounter, it was noticeable that every time Alphonse scored he pointed a finger upwards in memory of his late brother. When asked about that he said: “My brother passed away recently and we came from his funeral today. This was a big win for him and for me because he used to play for us. As a family we all came together everyone helped me, to bring me up, to give me that fight to play this game.”

For the third place playoff, GMU United FC took on Flow Lancers FC. It was another shutout victory as Flow Lancers FC breezed past their opponents with a 3-0 victory.

For FLOW Lancers FC, Albertini scored what proved to be the winning goal in the 30th minute. The other goal scorers were Montell Hippolyte in the 65th minute and Junior Hunter in the 75th minute respectively.

In other awards presented, Most Goals – went to National Under- 23 Senior Men’s Player Aaron Richards, while Rohan Alphonse was named MVP of the Finals.