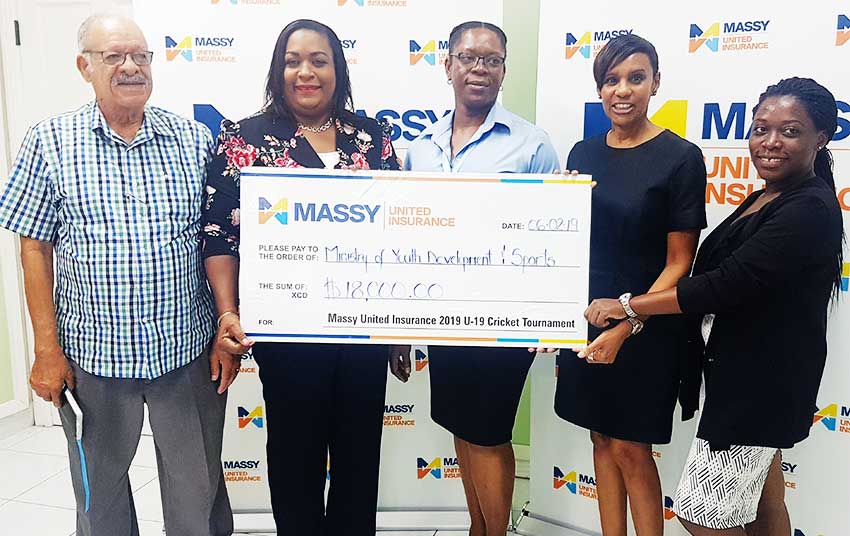 OVER 220 school boy cricketers and hopefully a few young ladies representing a combined 22 schools on the island will be returning to action today for the 34th edition of the Massy United Insurance Secondary Schools Under-19 tournament as they seek to dethrone last year’s joint champions Sir Arthur Lewis Community College and the Entrepot Secondary School.

Deputy Permanent Secretary, Liota Charlemange – Mason addressing the gathering said, “The Ministry is very pleased that you have agreed to support us this year, we know that we are doing something good. We have agreed to make some changes and to create more depth for the tournament as well as to give you our sponsors more visibility. The ministry will keep up to your expectations and we will do everything in order to ensure this year’s tournament is a good edition and what you would expect of us.”

“This is one of the only programmes of the Ministry that is sponsored by a company and not government. We promised and pledged to not disappoint you this year and to give you all that is expected from this tournament”. She noted.

Schools Sports Coordinator, Isabelle Marquis:, “This year we have extended our playing venues to six, Piaye playing field, Balata playing field, Wenn playing field, Gros Islet, La Ressource playing field (Dennery). We have the coaches working very hard with the various schools and also ensuring the venues and schools are fully prepared so we can get quality and standard throughout this year’s tournament.”

Weather permitting, the preliminary round will commence on Thursday 14th February – Monday 4th March, following which the top teams will advance to the quarterfinals and semifinals; while the final is scheduled for Wednesday 20th March.

The Ministry will also be highlighting a Massy United Insurance Player of the Match from the quarterfinal round; while the majority of the National Under-15 cricketers who won the Windward Islands Under-15 tournament will also be in action for their respective schools.

Marquis made a special plea to members of the public and parents to come out and support the efforts of the young men in action on the square as they compete against their peers for their respective schools.

Faye Miller, General Manager, Massy United Insurance:, “We take our corporate social responsibility very seriously at Massy. It’s a moral responsibility to give back. We are happy and proud to be sponsoring this tournament for the 33rd consecutive time. This year we are going to sponsor the tournament to the amount of EC$18,000.00 in cash and kind.”

“We will love to see, at the end, a Massy United Insurance All Star team. The last two years we selected a team, but unfortunately those teams did not get an opportunity to play. The news is out, there is a youth team visiting Saint Lucia from the United Kingdom in April and hopefully we could give our boys a chance to take on the visitors,” she added.

Miller took the time out to thank the Ministry for Youth Development and Sports for organizing the tournament year after year. She said, “You get better and better; we are pleased to see the sort of care and love you put into the tournament”.

In terms of the finals, Massy United Insurance (MUI) plan to make a big splash; MUI will meet with the local press where they will give further details as to how they plan to roll off the finals.

Former national cricketer and Director of J.E. Bergasse and Company Hollis Bristol said, “It was a difficult task to convince Massy. It was left for Faye Miller and her team to impress upon Massy that they must continue with this tournament. I am negotiating to get the sponsorship increased.”

He continued, “After the last Cricket West Indies Regional 4 Day tournament, where the Windward Islands defeated Barbados, there were two Saint Lucian players who played the Massy United Insurance tournament; Tarrick Gabriel and Larry Edwards. Edward picked up a career best 7 wickets in the match. It’s all of these things I am trying to bring to Massy so they can understand the importance of sponsoring this tournament.”