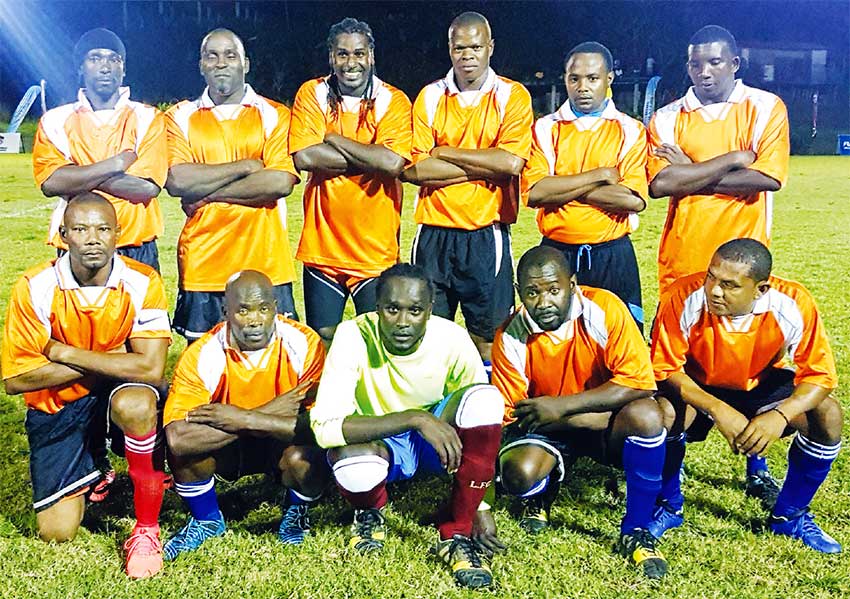 THE final rounds of the quarterfinal matches of the Veterans In Sports Inc were concluded on Sunday evening at the La Ressource playing field in Mabouya Valley, where the four semi-finalists were decided.

On Sunday, the matches for the day in Game 1 were between Vieux Fort South and Laborie and Game 2, All Blacks – Dennery and home team Valley Ledgens.

Vieux Fort South were licking their wounds as neighbours Laborie defeated them 1-0, a goal scored by their captain Donald Thommy in the 7th minute.

VFS with the likes of Douglas and Nicholas Marcellin, Jason Poyotte, Marcus Kangal and Andy Gabriel in its lineup was unable to come up big on the night despite several scoring opportunities at either end of the pitch.

Following the encounter Laborie captain Donald Thommy spoke to The VOICE and this is what he had to say. “We came here to win and that’s just what we did, all the players were determined. It’s a while we haven’t reaches this far in the tournament. We had a few training sessions during the festive season to maintain our fitness level.”

In terms of the semifinal, Thommy said, “We are into the semifinal round, we will continue working hard and we are going to step up to the plate when we play Prophets and Kings.”

In Game 2, home team Valley Ledgens would have themselves to blame for not making use of the numerous scoring chances throughout the 90 minutes of play as their supporters left the La Ressource playing field disappointed.

Leo James put All Blacks -Dennery ahead in the 6th minute of play to start a mini celebration both on and off the field by the ABD supporters; with five minutes left on Referee Nigel Mathurin’s watch Claudius Monnerville put All Blacks – Dennery further ahead in the 40th minute to make it 2-0.

On the resumption following the break, Valley Ledgens mounted relentless pressure on ABD with several counter attacks resulting in Sheldon Antoine pulling one back for the home team in the 66th minute of play to make it 2-1, that’s how the scoreline remained up until the final whistle.

In Game 1, Prophets and Kings defeated Choiseul 2-1 with goals from Pilgrim James in the 26th and Darrel Wiggins in the 70th minute of play; for Choiseul Fabian Phillip in the 51st minute.

In the second encounter, Vieux Fort North, on the stroke of injury time 90+2, scored the easiest of goals to book their spot into the semifinal ahead of Anse la Raye. The scores were locked 0-0 at halftime and regulation time, but one man made the difference on the night.

Wayne Theodore secured the semifinal spot for VFS after Bertie James took a powerful right foot shot that deflected off the Anse la Raye goalkeeper after he made a magnificent save only for Theodore who was standing in front of goal to tap home the winner.

After the win, VFN manager/player Richardson O’Brien said, “It looks like we are getting accustom to winning at the last minute just as we did to qualify for the quarterfinal round”.

In terms of several squandered scoring opportunities, O’Brien said, “The opportunities were on both sides, they come and go, but our chances were better. Choiseul started the game at the same level with us; there was a time in the game we realized we were dominating so we changed the plan around.”

With minutes left on the Referees’ watch he explained, “When we checked with the fourth official he said, two minutes of extra time, I made three changes, I brought in my penalty kickers and prepared my team for come what may.”