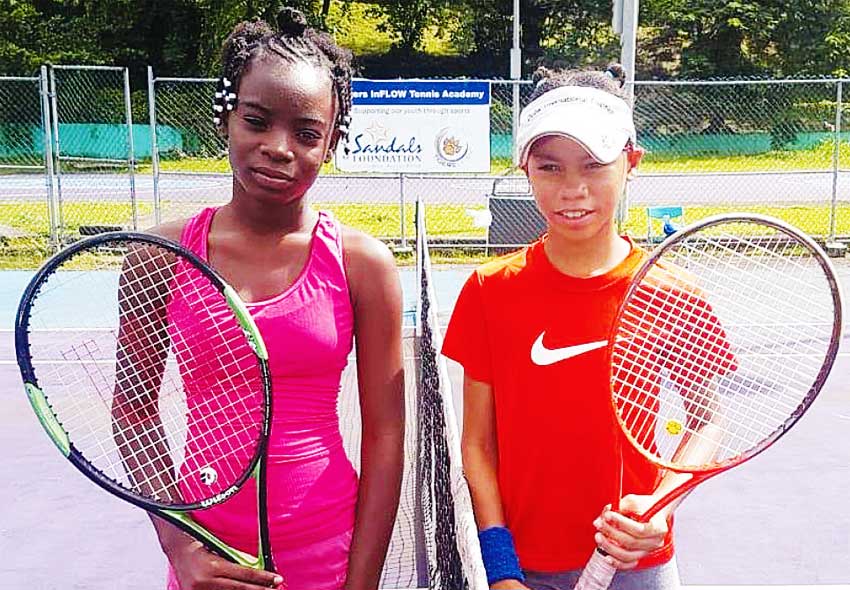 Weather permitting the thrills and spills and hits and misses continue this weekend in the 5th edition of the Voyager Tennis Open organized by Tigers In FLOW Tennis Academy currently ongoing at the Kenneth ‘Wriggler’ King Multipurpose Court at George V Park (The Gardens) in Castries.

The championship served off on Thursday 3rd January 2018; in the Girls 12s division there were victories for Latoya Murray over Briana Jn Baptiste 8-3; Amara Jn Marie had the better of Natasha Charles 8-3; playing her second game on the day, Briana Jn Baptiste defeated Amara Jn Marie 8-6 and Latoya Murray also playing her second game on the day continued her good run on form defeating Natasha Charles 8-2.

Boys 14’s, Peterson George had an easy opening round as he defeated Arden Rosemond in straight sets 4-1, 4-1.

Boys 18s, Ryan Nathaniel defeated Kyle Anius in straight sets 6-0, 6-0. In an entertaining and high intensity two hour battle on Court No. 2 Andre Fontenelle and Peterson George went head to head, but at the end George nosed ahead in straight sets 6-4, 6-4.

In the Girls 18s Nadjema Morille took quite a spill at the tail end of the first set while facing Netanya Faissal. Faissal took the 1st set 6-4. Morille appeared to be hobbling early in the second and her spirit would not allow her to quit; eventually the match was called at 4-1 to Faissal in the second. 6-4, 4-1 retired hurt.

In Girls 18s, on Court No.1, top seed Aviona Edmund made light work of Jace Leon in straight sets 6-0, 6-1; while on Court No.2, in what can described as an upset on the opening day, saw another thrilling encounter which went close to three hours as 11 year old Iyana Paul pulled off an epic win against Navit Isaac. Issac took the first set 4-6, Paul regrouped and took the second 6-3, the third could have gone either way, but Paul showed her grit in a ding dong battle as the pendulum moved from one player to the other, but Paul kept her nerves in tack to go on to win 7-5.

In the men’s draw Anthony Habib defeated Robert Huggins 6-1,6-1; in a close encounter Zy Richards defeated Johnathan Gladding 6-3, 7-6 (7-5 in the tiebreaker). Play was suspended for the evening in the encounter between Ronel Blanchard and Gregory Cooper at 1 set all 2-6 (Cooper), 6-4 (Blanchard); that match continued last evening (Friday) at 6.00 p.m.