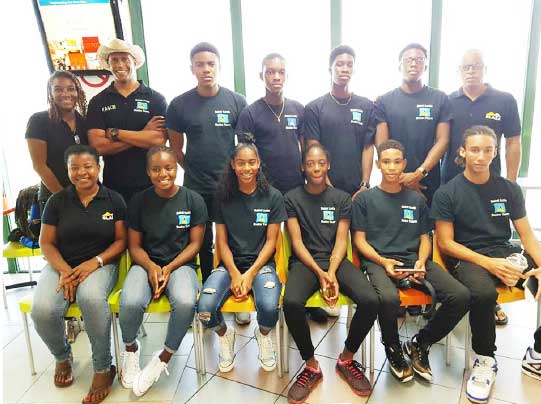 ALL that glitters is not gold, but one can safely say that the executive of the Saint Lucia Amateur Swimming Association (SLASA), under the leadership of Eddie Hazel, has presented to its affiliates an eye-catching and well-decorated calendar of events for 2019.

The calendar, which has a combined 40 local, regional, international events, FINA Clinics, developmental meets and SLASA Annual Awards, will commence this weekend in Martinique.

With just over a year before the Tokyo, Japan 2020 Summer Olympics, local swimmers will be going all out to set personal best times to keep SLASA Technical Staff in check. At a glance such calendar estimates it will cost SLASA close to $700,000 to execute.

So, the mystery question is: where will the funding come from?

Will Corporate Saint Lucia come on board to assist? Will the government of Saint Lucia put their monies where their mouths are and so to the Saint Lucia Olympic Committee (SLOC)?

In the words of acting prime minister at the time Lenard Montoute when Julien Alfred returned home to a hero’s welcome on 20th October at Hewanorra International Airport, He said, “This country owes you a debt.” Who are willing to assist our sportsmen and sportswomen to fulfill their dreams?

He also called on all stakeholders to come together and begin planning for the kind of support these athletes deserve.

Montoute said, “I have seen many talented athletes fall by the wayside and never make it to the next level because the requisite support was not in place, this government will not repeat this mistake.”

Let’s have a look at the calendar: the month of January will see local swimmers participate in the following championships – Claude Sufrin Invitational (12th – 13th in Lamentin, Martinique); Sharks Developmental Swim Meet (19th -20th at the RHAC); Grand Prix de la CTM (27th – 28th in Carbet, Martinique); and finally in the month for January, SLASA will stage its Prestigious Awards Ceremony where some of the Saint Lucia leading swimmers will be recognized for their sterling contribution for the year under review (2018), the event will take place on (Sunday 27th at the Financial Centre).

The annual Independence Open Championships will kick off the month of March as SLASA celebrates Saint Lucia’s 40th Independence Anniversary, the two day meet is open to all local swim clubs on the island; the event is scheduled for Saturday 2nd – Sunday 3rd at the RHAC.

With the CARIFTA Swimming Championship scheduled for April, Saint Lucia swimmers will have a last chance to qualify when they travel to Martinique for an event dubbed ‘CARIFTA Last Chance’ scheduled for Saturday 16th – Sunday 17th March.

The RHAC will come alive as the Lightning Aquatic Club will bring the curtains down as they stage the 3rd LA Relay Carnival on Saturday 23rd March.

The RHAC will come alive for the 20th edition of the RHAC Invitational Championships, close to 350 swimmers from a number of clubs throughout the region will compete at this prestigious event from Thursday 11th – Sunday 14th.

Just ahead of the CARIFTA Swim Championship, SLASA will travel to Martinique for their National Team Training Camp, this time around only the members of the Carifta team will be participating.

It’s too early to say the actual size of Team Saint Lucia travelling for the CARIFTA Swimming Championships scheduled for Saturday 20th – Wednesday 24th in Barbados, but one thing for certain, Team Saint Lucia will be going all out to better last year’s performance.

May – Falling on the heels on what can best be described as a successful year in the class room for swimming officials; SLASA will stage a FINA Open Water Clinic at the Saint Lucia Olympic Committee Head Quarters in La Clery.

Also in May, SLASA will stage the Saint Lucia Open Water Carnival at Pigeon Island and like previous years Saint Lucia swimmers will travel to Barbados to compete in the 28th Aquatic Centre International.

It was a blast in 2018, and by all indications, they are coming to take over the RHAC this year as SLASA in collaboration with the Chamber of Commerce will stage the 2nd edition of the Inter Commercial House Swimming Championships on Sunday 19th. Who will it be to dethrone last year’s champion Team Lawyers?

June 15th – 16th will kick off the Championnats de Martinique in Carbet, Martinique, like previous meets in the French territory Saint Lucia swimmers will compete.

Friday 28th will see the staging of the annual Primary and Secondary Inter Schools Swimming Championships at the RHAC.

That same weekend, SLASA will participate at the Championnats de Martinique in Lamentin Martinique.

A date has not been confirmed, but Saint Lucia (Central American and Caribbean Championship) CCCAN selectees will travel to Martinique for a CCCAN National Team Training Camp, following which the team will travel to Barbados for the CCCAN Swimming Championship scheduled for Wednesday 3rd – Sunday 7th July.

The 4th edition of the Karen Beaubrun Invitational Swim Meet is also scheduled for the month of July; no official date has yet been given. The event is organised by Sea Jays Swim Club.

With a spate of drowning in recent times in Saint Lucia, SLASA Annual Outreach Swim Camps for the North and South of the island dubbed ‘Learn to Swim’ will take place on Monday 22nd – Monday 29th July.

To wrap up the month of July, the 18th FINA World Championships will take place in Gwangju, Korea from Monday 12th – Sunday 28th.

SLASA Annual Outreach Swim Camps No.2 for the North and South of the island will take place, Thursday 1st – Friday 2nd August.

SLASA will continue to train and develop its officials; the Association will host a FINA Official’s Clinic during the month of August.

The 18th edition of the Pan American Games, a major international multi-sport event is scheduled from Tuesday 6th – 10th in Lima, Peru.

Bringing the curtains down in August will be the 7th World Junior Swimming Championships; the event will take place in Budapest, Hungary from Tuesday 20th – Sunday 25th.

Two events on the cards for September are SLASA’s Development Meet for Clubs and the other a Recruitment and Refresher Training for Officials, to include Timers, Stroke and Turn, Open Water.

The month of October will see another class room session for SLASA officials, this time it’s a FINA Intermediate Clinic, the event will take place at the SLOC Headquarters in La Clery.

It was exciting last year; in 2019 its back on the card, dubbed ‘Tropical Rhythms’ Short Course National Swim Meet, the meet which will take place at the RHAC and is organized by Sea Jays Swim Club.

The battle lines have been drawn and Team Saint Lucia is expected to leave no stone unturned when they travel to Saint Vincent and the Grenadines for the 29th edition of the OECS Swimming Championships scheduled for early November, saint Lucia finished third last year in Antigua and Barbuda; while the Inter Commercial Swimming Relay Carnival will take place on Sunday 24th at the RHAC.