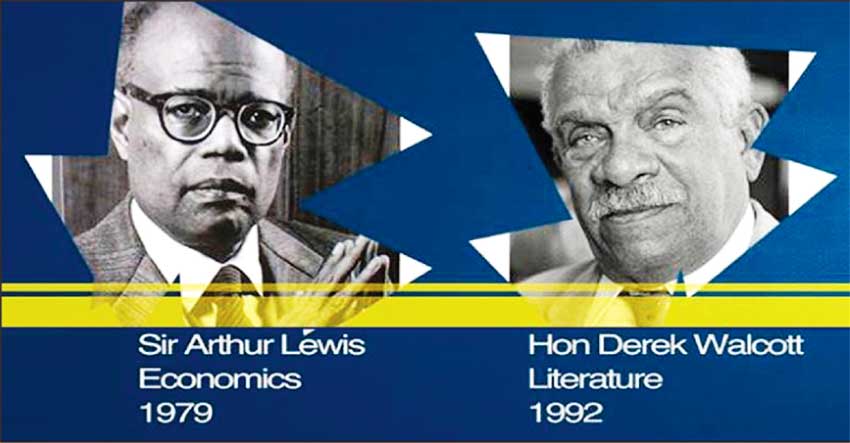 THE Caribbean is known for its sun, sea and sand. But outside of this Eden motif, we are also known for our love of the Arts.

We can proudly boast of a number of Nobel Laureates and stellar performers in the arts, in spite of our developing economies.

This month, we recognize the Nobel Laureates of Saint Lucia for their outstanding contributions to the literary arts and the business spheres.

Nobel Laureates Derek Walcott and Sir Arthur Lewis are hailed as national heroes this week as we celebrate their birthdays and their intellect.

Such excellence is not reserved only for Saint Lucia. In the Island Neighbour of Martinique, poet and author Aimé Fernand David Césaire stands out as one of the literary giants.

As a founder of the Negritude movement, Césaire boldly promoted the idea of a common black identity through his writings and his political career.

In recognition of his career, the Le Lamentin airport in Martinique was renamed the Aimé Césaire International Airport in 2007.

In the Nature Isle of Dominica, historian Lennox Honychurch stands out as one of the most respected in his field in the Caribbean.

Popularly known for the authored series ‘The Caribbean People’, Honychurch competently tells of lost civilizations in an effort to get us to understand our identity.

His efforts were recognized with an honorary doctorate by the University of the West Indies in 2012.

Who is your Caribbean Hero?

Happenings
Nobel Laureate Celebrations in St. Lucia have been launched. The launching took place on January 9th 2019. The theme for this year’s celebrations is “Celebrating Excellence: Forty Years on”.

Many activities have been organized for this celebration including the “Paint the Village” initiative led Jonathan Gladding with focus on Laborie’s historical heritage.
The event will take place on January 26th and 27th 2019. The Caribbean Book Fair and the launch of the Francis De Lima Award will take place at the Gablewoods Food Court on Sunday January 20th 2019 at 4pm and St. Mary’s College Tribute to the Laureates will take place on January 25th 2019 at 7:30pm at the National Cultural Centre.
Information on other activities can be found on the Facebook page – Nobel Laureate Festival: Saint Lucia.

Neighbourly GetAways
Taking a trip though the Island Neighbours is the perfect summer holiday present. Here’s what we suggest. Take a trip to the north east of Martinique to visit the Mount Pelee.

Learn about its rise to volcanic power, its destructive path and what the future likely holds for this giant of the Earth. When you are finished in the isle of flowers, visit Marie Galante for a relaxing eco-vacation as you enjoy the waters of Grand Bourg and the superb sandy beaches.

Let’s go Shopping!
Callings all shopaholics! It’s a new year and it’s time to talk about the trends we want to keep.

Whether you’re inclined to the British way or not, hats and fascinators remain fashionable for the church goer, professional and the socialite. They add that extra flare that you seek so don’t be afraid to use them to accessorize.

Go for the hat for that more conservative look, but if you love to embrace sophistication, the fascinator’s your thing.

Go ahead this year! Accessorize! Live a little!

History
Historical note! Did you know that Lennox Honychurch served in Dominica’s House of Assembly in various capacities? Getto know your neighbours!