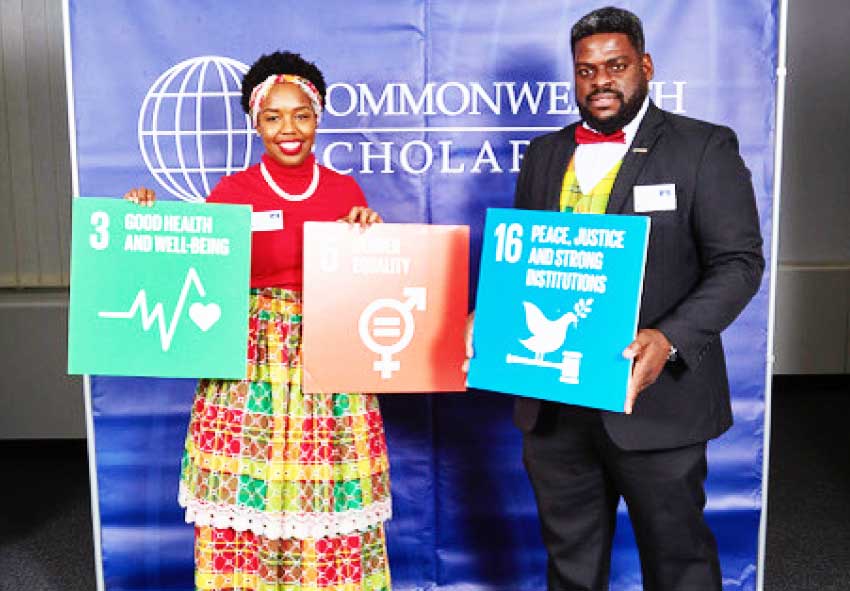 Based on their development plans for Saint Lucia, both Scholars are said to be heavily invested in the sustainable development of Saint Lucia. Their plans of study and subsequent benefits to Saint Lucia will contribute to the achievement of Sustainable Development Goals 3, 5, 10 and 16.

Mario has been a member of the Royal St. Lucia Police Force (RSLPF) from 2010. His family has a tradition of working in law enforcement, so from a young age Mario’s passion for the job developed. In 2016, Mario graduated from Monroe College with a BSc in Criminal Justice with First Class Honors. His substantive post is within the Marine Unit where he has worked in all facets of this unit inter alia engineering; operations; subaquatic search and recovery; and administration.

Now, he is studying Advanced Policing at the Liverpool John Moores University. In an interview at the Welcome Event Mario stated, “Policing continues to be a challenging, demanding and exciting profession which is subject to continuous change as it moves to an evidence- and technology-based approach to crime fighting.

“A Master’s Degree in Advanced Policing hones the quantitative research skills required by serving police officers, like myself, to use this approach. I intend to complete a dissertation on the ‘Effect of Policing on the Lives of Police Officers’ to inform policy and practice for the strengthening of peace, security and governance in Saint Lucia.”

Eventually, upon return to Saint Lucia, Mario hopes to grow into a leadership role within the RSLPF to help develop a strategic and integrated policing model reflective of public needs.

Warren G. Bennis, defines leadership as the capacity to translate vision into reality and this is what Danielle has always sought to do.

She stands by the notion that a country’s greatest asset is its human resource which must be empowered and nurtured through education, particularly in the academic discipline of Science, Technology, Engineering and Mathematics (STEM).

As a Tutor, Peer Advisor, recipient of undergraduate Biology and Biochemistry awards, Microsoft Office Specialist, Mentor, Head Teaching Assistant, Science Teacher, and most recently as the Science and Technology Officer (Ag.), Danielle has been a champion for Science.

Having worked closely with young ladies, she has developed a desire to contribute to the social landscape of Saint Lucia by being directly involved in solving crimes, many of which are against young women.

Also, her successful collaborations with the RSLPF, Saint Lucia Forensic Science Laboratory and Victoria Hospital on various projects that involved her development of their information management systems, have provided her with both the foundation and impetus to make further contributions to the development of Saint Lucia.

Danielle is currently pursuing a MSc in Applied Biosciences and Biotechnology at Imperial College London, who anticipates returning to Saint Lucia as a well-rounded individual, equipped to make meaningful contributions in Science and Technology through the discipline of Forensics. She also hopes to undertake a leading role in improving the island’s health sector.

The course content will expose Danielle to additional subject matter and knowledge in fields in which she is keenly interested, such as the application of biological sciences to real-world problems, specifically the prevalence of non-communicable diseases (NCDs).

The design and retrospective population of the Saint Lucia Postmortem Database by Danielle revealed most of the natural causes of death are due to NCDs such as cancer, carodiovascular and respiratory diseases. Genetic predisposition increases the risk of developing these NCDs so Danielle aims to use her training to enhance early detection and timely, targeted treatment of these diseases; and also help the citizenry to make better-informed decisions about management of their health.

Her skills can also be extended to DNA Analysis for criminal investigation. Inevitably, the impact of the introduction of a more rigorous use of DNA Analysis in crime detection and prosecution; and the availability of a national genetic testing service will be reflected over time by an improvement in crime interdiction rates, a reduction in mortality rates associated with NCDs and an improvement in the general health and well-being of the population as a whole.

These scholarships enable talented and motivated individuals like Danielle and Mario to gain the knowledge and skills for sustainable development.

Because of this scholarship both Scholars will possess their Master’s degrees from institutions in a metropolitan cultural, political and economic milieu before age 30 without an academic debt burden.

All of which provides a unique opportunity for their social development.
Thus, Mario and Danielle would like to encourage other youth to take advantage of this and apply for a Commonwealth Scholarship before the deadline date: December 19, 2018.