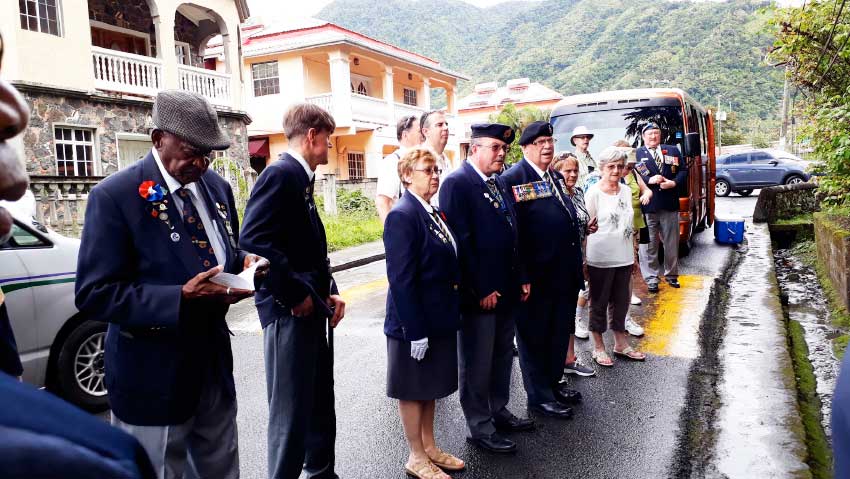 Remembrance Day has been on our calendar of events for years now, an address by the Head of State being one of its cardinal features.

By now, we must be saturated to dripping with knowledge of the horrors of war.

For my part, I have never tired of hearing the same thing repeated, over and over, especially when always, so nicely prepared and elegantly served.

Who can ever not be entranced by our Police Band, serenading us, softly.  No matter what our state of mind, it never fails to be soul-refreshing.

And as for Remembrance Day, reflections on what a day of woe today might have been for us, should make every other day as bright as the sun, no matter what our circumstances, rich or poor.

Since our first parents, life has been for all the most sacred of possessions.  So precious, that not even with all the treasures of the world can we preserve it.  To voluntarily place one’s life in danger, the reward must truly be worth it, therefore.

It will be recalled, that when the disciples were called, contemplating the hardships to be endured, they asked Christ what reward was there for them, to which He replied, ‘eternal life’.  And Christ Himself endured the Cross, as the goal before Him was the salvation of mankind.

When our people, in 1914 and 1939, joined the rest of the world, and faced the enemy, determined to wipe us out from the surface of the earth, whether in fiery flames, by skinning for leather, or by evisceration, or worst, they could not have been offered eternal life as a reward; but like Christ, they all faced death, that we might live.

And it is estimated that altogether, approximately 100 million died for us. They did not die in vain: for it is 73 years since the end of the last war, and 100 since the first, come 11th November.

In evaluating the worth of each who went to serve, those who survived are not to be seen as less valuable than they who died, for however humble the contribution, it is of equal value in the final analysis, be it that one was a kitchen hand, and another, in the front line.

We ask not, “What did you do?” but only, “Were you there?” Presence alone is enough, with or without scars to show.

Every November, in particular, we help relieve the distresses of surviving veterans and their families.  Those who neglect to do so are ungrateful, and lose the right to be called Saint Lucians.

On this hundredth anniversary, let our generosity surpass, by far, all previous years by giving as much as we can for a simple poppy.

Providentially, after 73 years, the propeller of the Indian ship, the ‘Umtata’, which was sunk in the Castries harbour by a German submarine, has been found, an indication that we, too, were under the radar of the Germans.

I expect that this unique treasure will be used to generate revenue to help veterans and their families in need, with tourism flourishing in Saint Lucia, as it is.

Finally, as a token of their appreciation for your good works, I humbly invite you to receive from me this prayer, composed by me, which has been my strength and fortification:

Who knows and sees all things,

Even our most secret thoughts,

I come to you for Grace and

guidance and mercy, and

prudence and patience and

tranquillity of spirit and eternal life,

and a spirit of gratitude and thanksgiving,

and a spirit of charity, and the

strength to bear all things,

gladly, for your sake; and

pray, that Your laws will

be the light to my feet. That’s what I want.

I thank all who have been working in the vineyard to help veterans keep body and soul together.  For so doing, you too, will receive your reward.  Peace and Love, fellow Saint Lucians, my people.