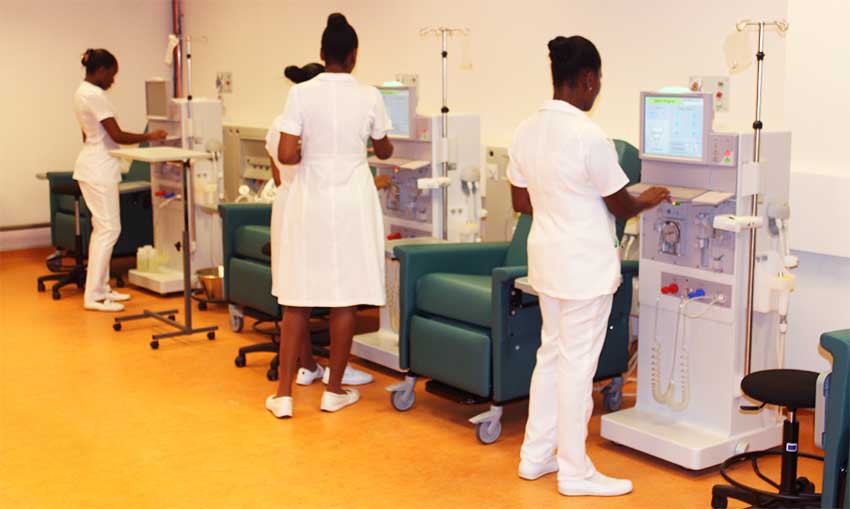 DESPITE repeated assurances by Prime Minister Allen Chastanet that there will be no job losses, uncertainty still reigns among employees of Victoria Hospital over their job status as the transition to the Owen King European Union (OKEU) Hospital edges closer.

This uncertainty, which is now being debated on talk shows and through social media across the country, was seen and heard at a recently-held meeting of nurses of Victoria Hospital, where they wanted to know exactly what they will be facing.

Government to date has outlined no concrete decision to staff of Victoria Hospital regarding the transition, only to say that employees will not lose their jobs as a result of the impending transition.

Yet, despite that, the uncertainty was heightened when an online social media post earlier this week claimed that a Cabinet memo to relieve workers at Victoria Hospital by the 15th of this month was sent to the Executive Director of the hospital, the Permanent and Deputy Permanent Secretaries of Health, the Permanent Secretary of the Public Service and the President of the Nurses Association.

The post drew lots of hits at home and abroad and the official response to that memo was swift. A similar post was posted, said to have been from the Prime Minister’s Facebook Page, denying the claim by the earlier post.

Meanwhile, the department of Health was equally fast in debunking the claims in the earlier post, but making no reference to it.

Prime Minister Allen Chastanet is officially on vacation until September 15. However, writing on his Facebook page on September 4, said the social media post about a Cabinet memo was untrue and that no such cabinet memo existed.

According to the PM: “There have been efforts by some to spread falsehoods about our health sector in their narrow pursuits to create fear. As of yesterday, a post has been circulating on social media stating that the Government, through a Cabinet memo had taken a course of action with regards to staff of the Victoria Hospital. I want to reassure all workers at VH that this post is categorically untrue and no such Cabinet memo exists. No such memo has gone out to the Ministry of Health, Nurses Association or anyone. Our Government reiterates that no jobs will be lost as a result of the transition to OKEU. The post by this irresponsible individual was obviously intended to undermine our health system and has created concern and worry around the world.”

He added that it saddens him that “persons would stoop to the level of using persons’ livelihoods as a political football and calling into question the country’s ability to deliver healthcare.“

“This issue is too important and can cause damage that affects us all. Once again I take the opportunity to reassure the staff of VH and all staff in the health sector that our Government will take no decisions that cause their jobs to be sacrificed. You are hard-working and we stand with you to create a better healthcare system we can all be proud of. In the meantime let us continue to dialogue and move our country forward and resist the urge to give in to persons who would prefer to plant seeds of fear and discord. Let’s continue to build a new Saint Lucia,” the prime minister said.

Meanwhile, Permanent Secretary in the Department (Ministry) of Health Felix St. Hill, in a statement yesterday, sought to reassure all staff members of the government’s three national health institutions involved (Millennium Heights Medical Complex, the Victoria Hospital (which is being transitioned into the OKEU hospital), the National Mental Wellness Centre and the Turning Point Rehabilitation Centre).

The PS made it absolutely clear that he had received “no directive to have any staff member resign his/her position in order to facilitate applications to the new Statutory organization.” (See PS’ Full Statement on Page 8)

President of the Nurses Association, Alicia Baptiste also denied receiving such a memo, which she said has affected the morale of the nurses at Victoria Hospital.

“The morale of nurses has been affected for a while now with all what’s been speculated,” she said, adding that this could impact on the quality of care nurses provide to patients.