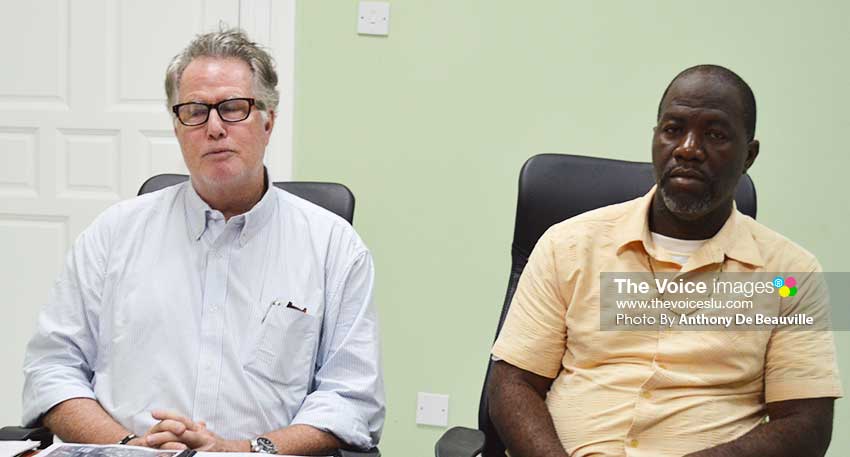 AS promised, the VOICE continues where it left off on Thursday 6th September 2018 to present to you, our loyal readers, Part 4, re Consultant Don Lockerbie’s presentation or Master Plan, as it is called with the media as the government of Saint Lucia look to remedy or improve the many dilapidated sports facilities on the island.

Before I proceed, it is pretty interesting to see at least one President of a National Sports Federation in Saint Lucia has boldly come out to say, “My organization never received an invitation to sit around the table to discuss “The Master Plan” with Don Lockerbie and Ministry of Sports Officials”.

President of the Saint Lucia Basketball Association Leslie Collymore said, “As a businessman, i understand well the concept of value and return on investment. I have no quarrel with any type of investment, once the return on said investment is positive and can be supported by empirical evidence in an acceptable timeframe, but in this case, I must confess that I have not seen any such evidence. I understand that there were a series of consultations that were held with “key” stakeholders by the consultant, but neither the SLBF nor a significant number of my sport administrator counterparts were met with to discuss our respective perspective and very unique needs and challenges”.

According to Collymore, “For the last eight years, SLBF have struggled to implement meaningful development programmes at all levels of the sport with minimal financial assistance from any administration, the Government Subvention for the development of the sport of basketball stands at just over EC$7,000 per year; whilst our average recurrent expenditure usually hovers at about EC$150,000-$200,000, and this is usually raised through corporate sponsorship, support from NGO’s such as the National Lotteries Authority, the Saint Lucia Olympic Committee, gate receipts from tournaments and affiliate fees. This as you can imagine, is no easy feat”.

Who is next, were you invited to discuss the Master Plan? I Guest Not.

This is what Don Lockerbie had to say, “The other one which I think is getting a little a of media attention, is what do we do with the Daher Mall? If I have a few minutes I will just tell you I have been by the Daher Mall for the last 17 years when I first came to Saint Lucia for the ICC, to determine if Saint Lucia will be a proper venue for the Cricket World Cup in 2002 that was my first visit, I think the Daher Mall was still under construction, but I have been passing it all these years and one day I asked Ricky (Minister of Youth Development and Sports, Attaché) to drive me in”.

“If was the United States it would be fenced off with a big sign saying, No Trespassing, we walked and drove right in and I fell in love with that building immediately. That building has now been looked at by architects and structural engineers and is still in very fine condition, it was built very well, Yes!! There is now a lot of damage to it. We will be going in there and look into trying to come up with a solution where the back of the building is very well suited for Saint Lucia’s only and frankly the region’s really first world class indoor sports and entertainment events theater arena / Multi-Purpose”.

“It’s very large enough to have several thousand seats, and one night it could accommodate a major basketball or boxing event, the next night it could have a major concert, trade /boat /car shows/ religious/ and conferences; and meanwhile the front of the building still has about 180,000 square feet of retail and hospitality space, which really could become an amazing events space when there are events or sports practicing going on, and plenty of hospitality space, maybe a fitness gym and a bank”.

“Did you also know there are 250 parking lots underneath, so you now have about 200 spaces for parking in front and another 300 below DaherMall. There are 500 parking spaces there; name me another place other than the two football ground and cricket ground, it’s an amazing place. That’s on the radar as many other venues throughout the country”.

“I will just complete by saying, to show the initiative is real, we put out a worldwide tender to try and locate synthetic turf and running track, basketball/ volley and netball court, you name the sports. Cricket grounds, natural turf, batting cage/ nets and eventually swimming pools as well, lighting/score boards/ video boards companies, all of the elements that are necessary for upgrading our sporting infrastructure”.

“We sent to nine sporting conglomerates from around the world, seven responded, after an intense review with the government’s appointed selection committee; a committee that is chaired by Minister, Edmund Estaphane, and also includes Minister – Herald Stanislaus, Minister – Leonard Montoute and other members of the community. We narrowed it down to four, major worldwide conglomerates. These are the companies that when the great European football clubs or the NFL (USA), NBA think who do they want from when it comes to flooring, to sporting equipment, these are the companies that they look to”.

“Before me I have the proposals of the four finalist; ten or twelve people flew in to tour/look at all the venues, they met with the selection committee socially; the Prime Minister (Allen Chastanet) came and met each company and encouraged them to give the best deal possible and to learn from them what they had seen; each company was interviewed and presented their bid at the Habour Club conference room (Rodney Bay – Gros Islet)”.

“It was very, very intense, these companies are all very good; as a consultant I probably could sleep well at nights if any of them get the work. But its winner take all. The company that will be selected will enter into an agreement with the government to do the five facilities we have talked about and then we will have the right of first refusal if those go well, to continue the next phase. In other words, we are looking to have a long term partnership with one of these companies”.

“That is the update, we have not selected them, there is more work to do, we have to kick some tires, because these are the four finalist, they presented us with facilities that they have all around the region and the United States of America. Over the next few weeks several of the selection committee members will go and kick tires and visit some of the venues that has been recommended, but more than likely in September there should be an announcement of which company has been selected. I think that is more than enough”.

The VOICE Newspaper of Tuesday 11th September will present (The question and answer segment -Guess you can’t wait to read: What a hand shake and a game of golf can do. Is it a sign of fair play, that is what is required at the end of a game; good sportsmanship, win or lose we both are winners or good business partners).