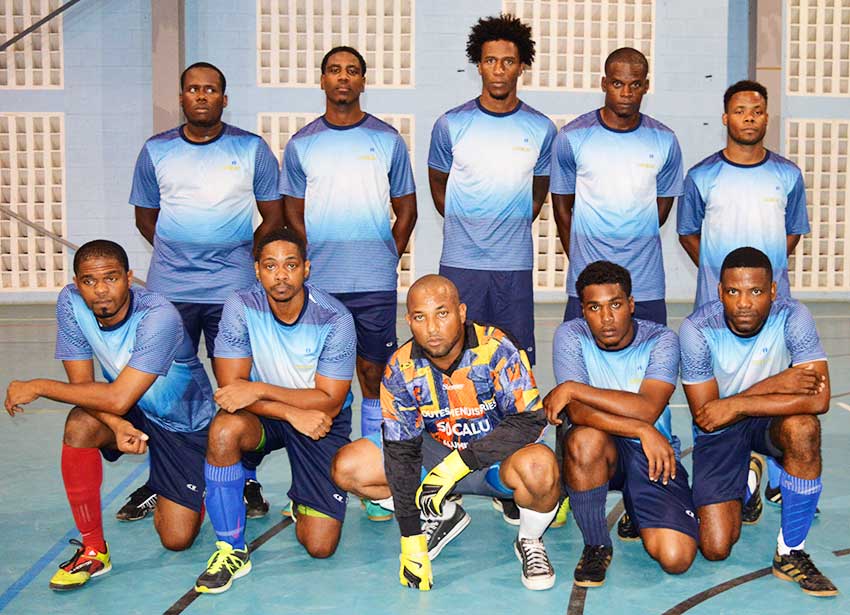 Forty goals were scored  in five matches at an average of eight per match, with opening victories for PCD Distribution, WASCO, Saint Lucia Teachers Union and Arktel /1888 Go Anyway, as the third edition of the Inter-Commercial House Futsal tournament kicked off on Friday evening at the Beausejour Indoor Practice Facility.

Game 2, in a water and electricity showdown between utility companies WASCO and LUCELEC, both teams came out firing from the very first whistle of Referee Andrew Phillip and Leo Clarke. But at the end of the 40 minutes on centre court, WASCO nosed ahead 3-1 with two goals from Richard Annius in the 20th and 27th minutes and one from Ahmed Chandler in the 24th.

LUCELEC’s lone gold came from Ryan Augustin in the 32nd minute of play.

On Saturday evening in Game 1, Flow breezed past M&C Limited 6-2 as the latter had no answer to the speed and skillful Flow team.

For Flow, Anthony James opened the scoring in the 12th minute, while Kissinger Anthony made it 2-0 in the 13th. James went on to score his second of the match in the 16th minute to make it 3-0 at the halftime whistle.

On the resumption, M&C cut the deficit when Yanikie Henry found the back of the nets in the 24th.

Flow was back on the fourth official scorecard as Nicky Kerton made it 4-1 in the 30th minute; and with a bit of hesitation in Flow’s defense, Joseph Jarvis made it 4-2 for M&C in the 35th — and that’s all they would score as two quick strikes from the boots of Anthony Christopher in the 36th and 40th minutes, and another from Kissinger Anthony in the 38th minute, sealed the deal.

Powering their way to the biggest win over the weekend, Saint Lucia Teachers Union trounced first-timers J.Q.Charles 14-0, with beaver trick from Lynch Isidore (5), Dyke Francis (4), MwugabeProspere (2) and one goal each from Jean Claude Xavier, Kurby Felix and Nigel Francis. The half time score was 7-0.

For NIC Group, DeelanModeste scored both goals for his team in the 8th and 18th minute.

Tomorrow, the showpiece continues at the BIPF with three matches — from 6:30p.m., NIC Group will look to make amends following their first round defeat at the hands of Arktel/1888; Go Answer will take on Bay Gardens Hotel; Bel Jou plays Renwick at 730p.m., while Blue Waters will no doubt want to forget their 8-1 drubbing at the hands of Saint Lucia Techers Union as they take on CPJ at 8:30p.m.