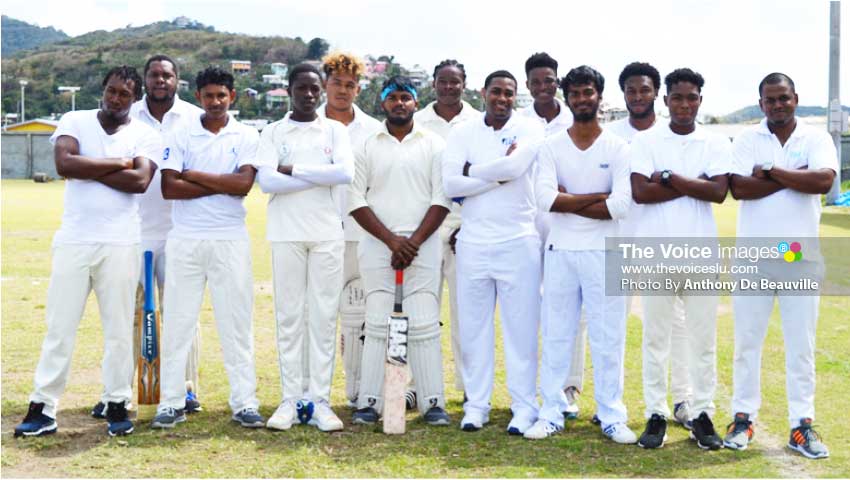 The sensational victory by VFN was one of two matches played this past weekend in the Saint Lucia National Cricket Association (SLNCA) Division One Cricket tournament.

Captain Hafeez Ali was next in, while Shervin George in the meantime raced to his 50 with 3 fours, the pair added 73 before Ali was caught by Eardley Dupre for 26 off the bowling of Adam Charlery with the score on 140 for 4. Charlery went to pick up his second wicket in the match, that of Asa Joseph, LBW for 24 with the score 189 for 5.

Shervin George was joined by Jermaine Harding as the pair belted the VFS bowling to all parts of the PMG; the two added 113 and in the process George reached his 100, the first for the 2018 SLNCA season; Harding followed suit with a well-played 50 before he went out via the LBW route to Kern Xavier. A knock that comprised 2 fours and 5 towering sixes.

Youth player Tyran Theodore didn’t last long, bowled by Daren Pierre for 2, while Dwayne William quick firing 37 not out that included 5 fours and 1 six off 23 balls and Servin George remained on 151 not out when the declaration came. George’s innings comprised 11 fours and 4 sixes.

Chasing 375 for first innings points, Tyran Theodore (3 for 33), Kennedy Longville (2 for 28) and Merv William (2 for 9) rattled the Vieux Fort South top order with early wickets as the home team were reduced to 5 for 72, before declaring on 139 for 8 to avoid giving VFN maximum bowling points.

Asked to follow – on with a deficit of 237 runs, plenty of time left in the game on day two and no threat of rain in the distance, VFS was bundle out for 42 in 18.3 over with captain Al Prince top scoring with 9.

Bowling for VFN, Shervin George picked up 4 for 5, Tyran Theodore 2 for 2, Jermaine Harding 2 for 3 and Kennedy Langellier 2 for 31.

Following a late start, Central Castries recovered from a middle order collapse from 121 for 7 to be dismissed for 197. Jamal James 51, Stephen Naitram 38 and Keygan Arnold 36 were the main contributors with the bat.

For South Castries, Tonius Simon picked up 4 for 60 and Xavier Gabriel 3 for 29 respectively.

In reply South Castries was led past the target with half centuries from national players Tonius Simon 71 not out and West Indies batsman Johnson Charles 52.

Batting a second time Central Castries closed on 22 for 1.