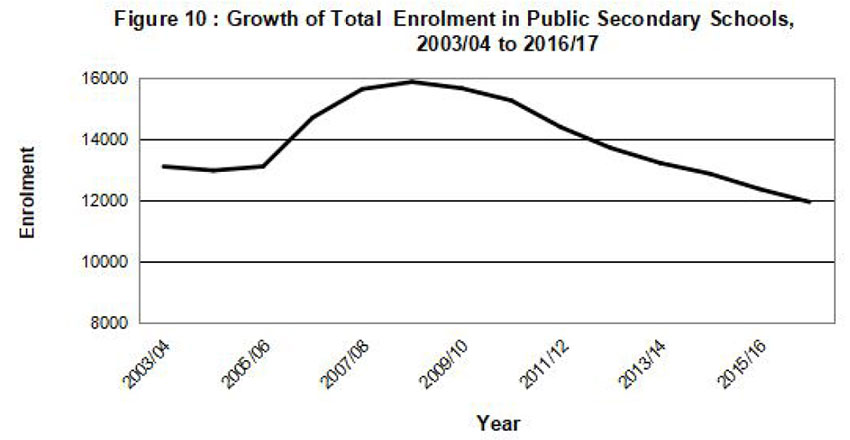 UNIVERSAL Secondary Education (USE) has grown obsolete over the last 13-odd years. In order to prove such a bold statement, I will first define what USE means in St. Lucia and how it has developed over the last decade-plus.

USE is not only the idea that every primary school child is guaranteed a spot at a secondary learning institution. It also entails the steps that were taken to ensure that at the time this was possible, especially the millions of dollars that our Government borrowed from the World Bank, as well as the infrastructure that it built to make the USE (Utopian) dream a reality.

The determination at the time was that the infrastructure available was not enough to accommodate and house the spike in student numbers after USE. Therefore, the public secondary schools total went from 20 in 2005 to 24 in 2006.

The focus of the Government was to build new secondary schools in areas it deemed secondary education was lacking. As the aforementioned report went on to say: “Dr. Anthony made it clear that a study undertaken by the Ministry of Education revealed the locations where secondary education was most deficient were in Anse la Raye and Gros Islet. Dennery was another area that the location study showed was in dire need of additional secondary school places.

“We have, therefore, decided that the Grande Riviere Senior Primary School in Dennery will be upgraded to full secondary status. This upgrading will lead to the creation of an additional 280 places. The rehabilitation and upgrading of the Clendon Mason Secondary will also yield 150 additional places and new facilities for that school. A total of 13 existing Secondary Schools will be rehabilitated under this project,” said Dr. Anthony.

However, the then Ministry of Education’s aforementioned study did not factor in the decline in not only primary school enrolments, but in the number of primary schools period, during the years leading up to 2006; a fact which would ultimately spell doom for the projects carried out to implement USE.

Within five years of the USE Decline Period, secondary school enrolments had dropped to within a hair’s breadth of the totals during the final year of the Pre-USE Period.

After six years, that number had fallen below the enrolment numbers of 2005/2006, the year before USE was implemented. For by the year 2014/2015, only 12,861 students were enrolled at secondary schools. Also, quite notably, the number of secondary schools had fallen from 24 to 23; which was perhaps the first move by the Government which confirmed its acknowledgement, that the extra infrastructure built to accommodate USE was becoming obsolete.

Quite staggering in the grand scheme of things, that in less than ten years after USE was implemented, to accommodate the anticipated swell of student numbers, enrolment figures fell to Pre-USE Period Levels and the total number of schools fell to 23.

Those schools were not built to be useful for a decade, but to last into the future. However, they began to become obsolete in less than ten years, as the students they were built to accommodate, simply weren’t there by 2014.

Things only get worse after this.

The Education Digest forecasts that by 2020 there will be 10,707 students enrolled in secondary schools across the island. That figure would be the lowest since the 1995/1996 academic year, when there were only 10,314 students enrolled. As more and more money is being pumped into Universal Secondary Education every year, there are fewer and fewer students it’s being spent on.

Now the question becomes this: As the secondary school student population declines to levels below even those of the Eighties, what will happen to schools where student numbers continue to decline at such a rapid rate? What will happen to the 1000-plus teachers currently employed to teach them? And how will the vacated schools be used by the government which spent millions to build them?

Yet under the watch of USE, the 40% who passed the Entrance Exam, as referenced by the then Minister of Education, now outnumber the 100% of students who are currently offered a place at secondary school. Funny how that has worked out.