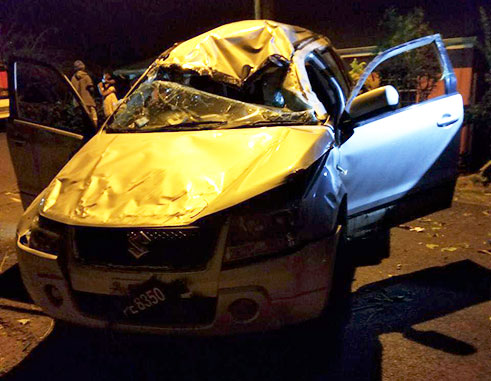 SIX weeks into 2018 and St. Lucia is off to five vehicular accident-related deaths. And what is the general consensus to annihilate this problem? Let’s raise the age at which you’re able to attain a license to legally venture local roadways. The reasonable thinking person can easily assess how flawed this is, seeing as it totally bypasses any other rational solution and lands squarely on “the young people are irresponsible”.

It hardly needs to be mentioned that people over the age of 21 are victims of car crashes, too. It shouldn’t have to be said that even with a hypothetical shift in the provision of licenses, people will still die as accident victims. Understandably, then, the issue is not with age, but with failure to be precautionary.

The cliché “precaution is better than cure” reigns true here, albeit that there isn’t really a cure to death. However, the tendency for young drivers to try to impress their friends (even subconsciously) with feats of speedy driving often leads to incidents and, in serious cases, accidents. Novice drivers who are adamant that the roads of St. Lucia are made for them – to cater to whatever law-bending antics they feel like – are often the ones who end up injured, or worse.

When the people of a country fail to protect themselves, it then falls on the laps of those duly appointed to “protect and serve” to keep tabs on the behaviour on the road. Admittedly, following sightings of beer cases in the back of certain government vehicles, and swerving lawmen on the Gros Islet Highway, their ability to set an example comes into question. St. Lucian authorities lack the necessary resources to make sure that driving is as it should be. Speedometers, breathalyzers and a physical police presence late at night or on weekends are disapprovingly lacking. Solid examples are hardly ever made of law offenders, so other drivers never fear the possible consequences, including loss of life.

Discussions on local news offer some sort of reassurance that the citizenry isn’t totally biased against young people. Re-administering driving tests ever so often, making defensive driving sessions more frequent and more authoritative feet on the ground all seemed like more reasonable choices (as per the regular St. Lucian).

Realistically, there is no possible way to stop every single accident. There is no way to ensure that no one will lose their life in an accident. As a young person myself, I am not totally sure what the right solution is, or if there is even just one solution. For a start, it is best not to throw caution to the wind lest seemingly calculated risks go off-track.