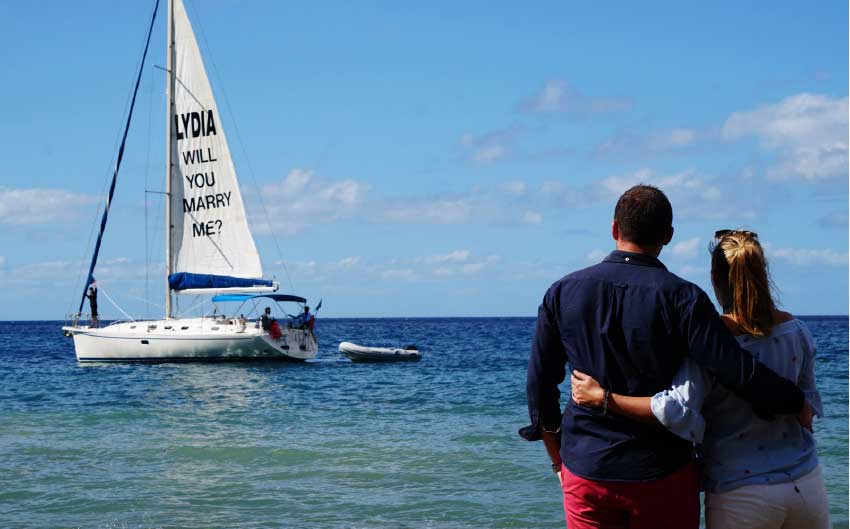 PRESS RELEASE – This Valentine’s Day, Saint Lucia is being featured in a major British Airways Social Media Campaign. The video, titled “Royal Navy Officer Pulls Off The Ultimate Proposal”, has already received 77,000 video on Facebook and has been featured in a number of news publication across the UK.

The proposal, filmed on island earlier this month in partnership with the Saint Lucia Tourism Authority, included a stay at Sugar Beach, A Viceroy Resort and a visit to Hotel Chocolat. Their trip concluded with a romantic lunch at Anse Galet beach prepared by Saint Lucian Chef Robby and ended with the grand proposal that at centre-stage, had the words “Lydia Will You Marry Me?” printed on the sail of a passing yacht.

The #BAMAGIC campaign which started in 2017 with the tagline “Can we create some #BAMAGIC for somebody you know?” has showcased some moving stories with truly heartwarming results. The episode airs on the British Airways Website and social media pages this Valentine’s week.

You can view the entire video on the main BA website: https://www.britishairways.com/en-gb/destinations/where-in-the-world/bamagic and read one the articles done on the campaign at https://www.somersetlive.co.uk/news/somerset-news/valentines-day-2018-watch-moment-1208825