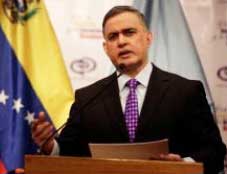 PRESS RELEASE – “From Colombia is being planned to re-edit eras already cancelled in the history of humanity, such as is the military bombing, as is the military invasion, occupation by blood and fire of a peaceful country like Venezuela. We will not allow that.”

This was stated by the Attorney General of the Republic of Venezuela, Tarek William Saab, during his participation in the celebration of the 380th anniversary of the founding of the city of Barcelona, in Anzoátegui state.

During his speech as a keynote speaker, the representative of the Citizen Power referred to the strategies of intimidation and psychological terrorism against the Venezuelan people.

“What are the people of Venezuela guilty of, in order to deserve a bombing, as threatened in recent times by the President of the United States, Donald Trump, who did not rule out a military option?” Saab emphasized.

In the opinion of the high official, all the recent interventionist threats against the nation which began in December with accusations from the European Union, took place to implode the process of peace dialogue held in the Dominican Republic between the Government and the opposition.

In statements to Radio Nacional de Venezuela (RNV), Saab recalled the 60 years of conflict that Colombia has lived in, where Venezuela sheltered 6 million Colombians and was a determining factor for the peace dialogues in that country.

“Today, the most dangerous superpower in the world as is the United States, has given signals from Colombia to move troops and threaten the territorial integrity of our country. Today, we must all rise up in a single voice for the defense of Venezuela’s right to live in peace, settle our differences through dialogue and the electoral debate”, said Saab.