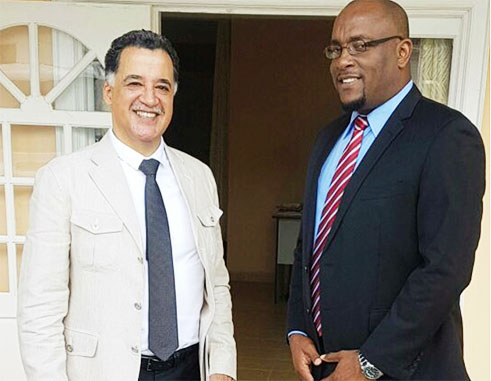 PRESS RELEASE – THE Ambassador of Mexico to Saint Lucia and the Eastern Caribbean States, His Excellency Oscar Esparza-Vargas, on Monday paid a courtesy visit to the offices of Dennery North MP, Shawn Edward.

The visit got underway with a meeting at the Richfond-based Dennery North Parliamentary Office. There, the two men held familiarization talks as they were meeting for the first time since Ambassador Esparza assumed his duties in Saint Lucia roughly six months ago.

They discussed a range of issues, including the impact of the Dennery North Water Supply Improvement Project on the community. The Government of Mexico is funding the project to the tune of US$5 million (EC$13 million). Phase one of the landmark cooperation initiative was recently completed.

Edward expressed his heartfelt gratitude to the Government and people of Mexico for coming to the aid of his constituency, in particular for their support in ensuring a safe and reliable water supply system for residents.

Ambassador Esparza reaffirmed his country’s support for programmes geared toward the social development of St. Lucia and the wider Caribbean.

The two men exchanged views on possible areas of cooperation and pledged to continue working together.