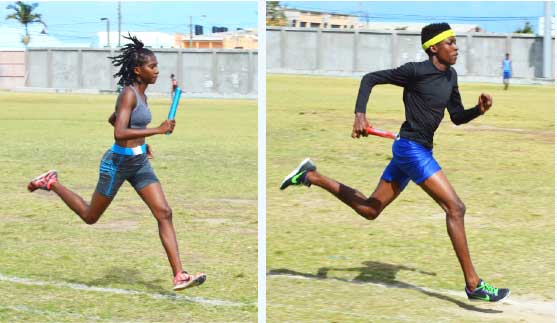 THE Phillip Marcellin Grounds in Vieux Fort was abuzz on Thursday last as Vieux Fort Comprehensive Secondary School staged its annual Inter-House sports meet. Clarke House was declared the champion team for the second consecutive year, while Augier (Yellow House) moved one spot up the order in over 20 years to unseat powerhouse Walcott (Green House).

Augier, sitting at the bottom of the points table, finally got past former champions Walcott after tallying 712 points to Walcott’s 647 points.

Lewis were not too far upfront in second on 768 points, while Clarke were runaway winners after managing a whopping 881 points on the day.

The two-time champions owed much of their success to a strong boys and girls team powered mainly by division winners Zadie St. Louis and Tarrik Xavier, both members of the Pace Setters Track and Field Club.

VFCSS will now turn their attention in selecting a final squad in preparation for the Southern Zone Qualifiers scheduled for March 5 and 6 at the La Ressource playing field in Dennery and then the grand finale the Inter-Secondary Schools finals one week later at the Daren Sammy Cricket Ground.

Meanwhile, House Master for Augier, Lydia Charlery, spoke to The VOICE following their outstanding performance. Though they did not win, coming out from the bottom of the points table in over 20 years, she said, was a plus.

“What really propelled our children was the encouragment we gave them to compete even if they didn’t want to go,” Charlery said. “We kept telling them to just go and give us that 1 point (that) will make the difference at the end. Also, we would say to them, ‘Go and walk, don’t run the race. Just walk it and give us that 1 point’.”

Charlery acknowledged Nicole Farrell, about whom, she said, “This child would go up and beyond for Augier House. She is one we have to commend; also the likes of Nia and NevalAuguste (Division 2) — they just stayed with us, saying, ‘Miss, I will do it.’ Although it didn’t seem that we would get to that point at the beginning, the hype and our drum squad kept things going in our section throughout. I saw some really great work from our athletes.”

Charlery added that Augier House should not be taken for granted and come next year they will be going all out to challenge Clarke and Lewis House for the top spot.