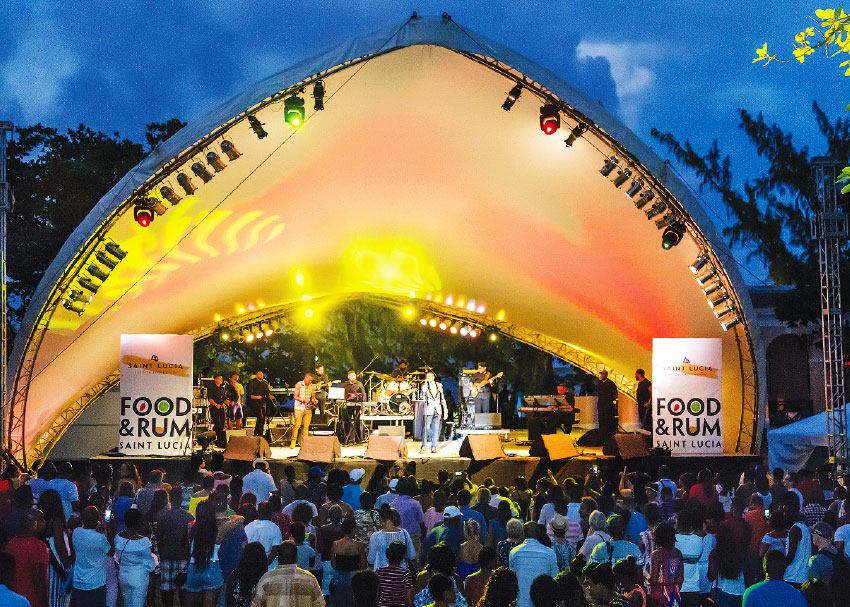 PRESS RELEASE – THE Saint Lucia Food & Rum festival marked its return with a proof of concept pilot held from January 12-14. The festival featured a wide array of culinary and rum experiences across three days, drawing on the island’s rich culinary heritage with participating restaurants throughout the island featuring rum-inspired Prix Fixe menus over the weekend.

Festival Highlights
The Chairman’s Reserve Spiced Rum Cocktail Challenge showcased the talent and creativity of the island’s best mixologists as they competed for glory and the rights to create the island’s first signature cocktail.

The inaugural Caribbean Rum Awards were a central point of the festival. The awards were curated by Caribbean Journal, with a team of nine judges, through a series of blind tastings that covered six categories which celebrated the deep history and excellence of Caribbean rums.

The Friday night’s “Fish Fry” in the village of Anse La Raye became the grounds for the festival’s launch party, offering rum tastings, rum-inspired sauces paired with seafood and first-class entertainment along the bayfront.

The Rodney Bay Village hosted an evening of culinary decadence with the “Rodney Bay Village Culinary Pavillion”, featuring sampling booths from the surrounding restaurants coupled with live entertainment which transformed the street into a mini-food fair.

“The collaborations were key to the success of the festival, providing both a platform for skills transference, mentorships and a sublime showcase of Saint Lucia’s culinary excellence. We believe the partnerships forged will only serve to further develop our product by elevating Saint Lucia,” said Executive Chairperson of the SLTA, Agnes Francis.

The festival attracted thousands of patrons and over a dozen international journalists representing 20 publications across the United States, Canada, United Kingdom and Europe, who all lauded the festival’s unique blend of experiences.