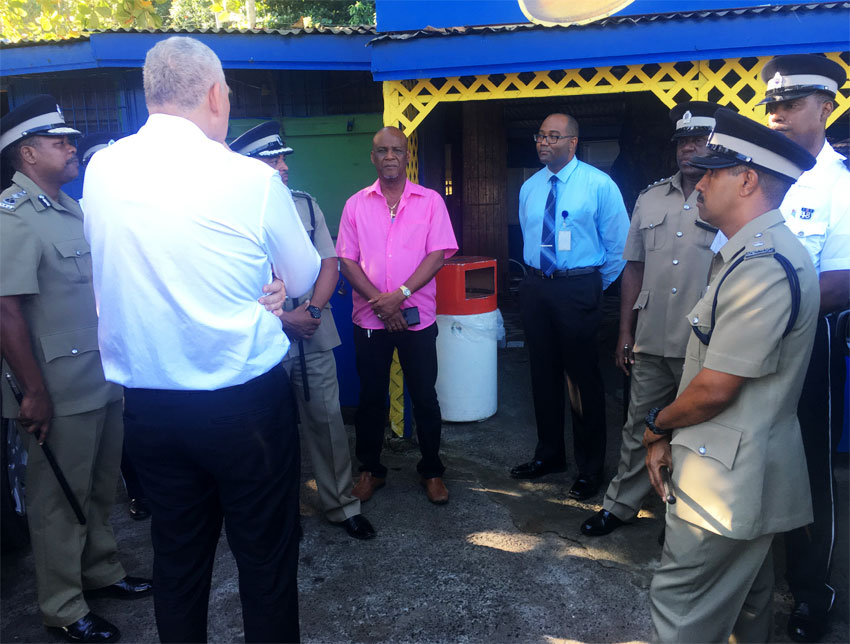 PRESS RELEASE – The Mayor of Castries, Peterson Francis, has embraced the ambitious development plans by the Government of Saint Lucia to upgrade the Bananes Bay area.

The announcement was made by Prime Minister and Minister of Finance, Allen Chastanet, during a meeting in Bananes on Thursday January 4 with Mayor Francis, the hierarchy of the RSLPF and Acting General Manager of SLASPA, Daren Cenac, during which they discussed various ways to improve the area.

The nearly one-hour-long meeting explored plans to enhance the general image of the Bananes Bay area which is a point of entry to the city of Castries.

In the coming weeks, the public will witness a gradual transformation of that area through a first phase beautification project.

Prime Minister Chastanet hopes to encourage commercial activity and develop the entire Bananes Bay strip with green spaces, park benches and restaurants along with the relocation of the Marine Police and new Police Headquarters at the old Golden Hope Hospital site.

Speaking to the plans, Prime Minister Chastanet stated: “We cannot have a point of entry to the capital city in such conditions. It is an eyesore to members of the public and what’s worse is that’s the first thing cruise visitors see when vessels come in to berth at Port Castries. This certainly cannot and should not reflect what we are as a people.”

“All this will form part of plans to the redevelopment of the City of Castries,” noted Prime Minister Chastanet.

In embracing the plans, Mayor Francis said he will work in tandem with other stakeholders to ensure the goals are realized.

“You can count me in as this plan will tie in nicely with the upgrading of the Castries Market and the general redevelopment of the City of Castries,” Francis said.