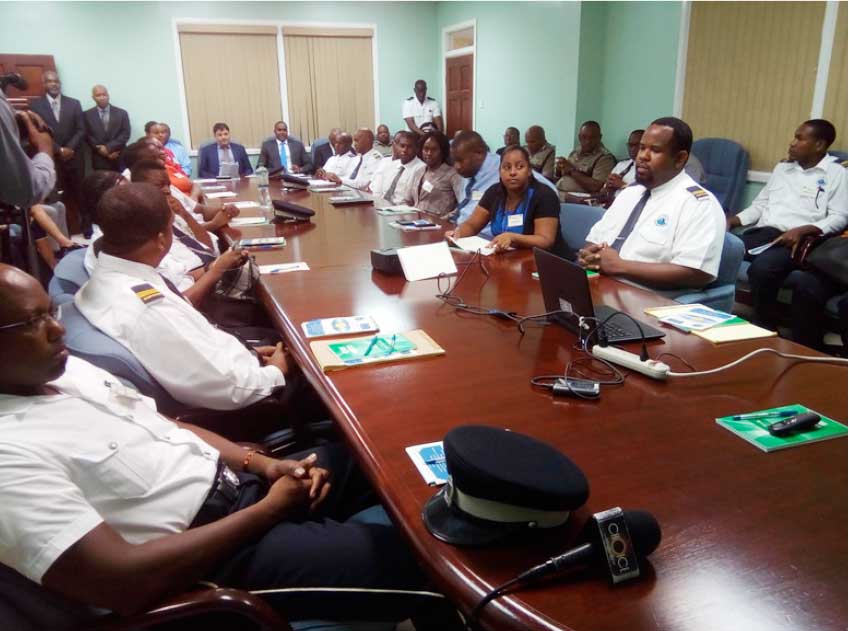 POLICE Commissioner SeverinMoncherry has given the thumbs-up to a week-long workshop on strengthening the country’s borders that started yesterday in the conference room of the Ministry of External Affairs and International Trade at Baywalk Mall, Rodney Bay.

“The workshop is something we have been waiting a long time for and we are going to make the best use of it,” he told participants comprising Customs and Excise officials, Border Patrol officers and police officers.

The Joint Border Security Training Workshop is one component of a wider programme of works funded by the European Union’s 10th European Development Fund (EDF) geared towards strengthening CARICOM’s capacity to prevent and detect illegal activities at its borders and to enable increased prosecution and higher conviction rates.

The component under which the workshop falls deals with strengthening border security to support harmonization and standardization of practices, policies and procedures utilized by Customs and Immigration.

Moncherry called on participants to stop blaming St. Lucia’s porous borders for the illegal merchandise and illegal immigrants in the country because most times there is no proof that illegal drugs, guns and other illegal products come through the leaky borders.

“Some (illegal goods) may very well come in through legal means,” Severin said.

The Police Commissioner said criminals work together and network, therefore law enforcement officers must do just the same.

“It is for us law enforcement officers to ensure we pool our resources and work together. We need to ensure we keep in touch with the modern world and with technology,” he said.

Moncherry entreated the body of law enforcement officers at the workshop not to allow lawbreakers, criminals and unscrupulous persons to turn them down the wrong path.

“We need to ensure we perform our duties to the best of our abilities. Ensure you do not bring the reputation of your organization into disrepute. Understand the criminals are not your friends. They will use you after which they will dump you or get rid of you,” Moncherry warned.

Dr.Ubaldus Raymond, Minister in the Ministry of Finance, said government will continue to employ robust crime-fighting techniques and strategies to dismantle criminal organizations in the country.

Dr. Raymond, who delivered the keynote address at the workshop’s opening, added that government remains committed in ensuring that the country’s border control personnel are equipped with the necessary tools to combat illicit activities.

“Government, in the fight against crime and as a means to ensure security is not compromised at any level, is responding by pioneering new, smarter ways to manage the legitimate movement of goods and people into and through our borders,” Dr. Raymond said.

“We will continue to enact our own legislation to combat illegal activities at all levels and employ technologies that can facilitate the movement of persons into and out of St. Lucia without compromising trade and security,” he added.

Francis Forbes, Executive Director of CARICOM Implementation Agency for Crime and Security (IMPACS), who spoke briefly at the workshop’s opening ceremony, urged for the adoption of new and effective ways to deal with new and emerging threats.

He noted that within the years 2006–2016, 23,726 citizens of CARICOM were murdered with the weapon of choice being, in many instances, illegal firearms.

He contrasted this with the amount of illegal firearms seized by law enforcements officers in the same period (21,844) to illustrate the need for reflection of the security environment in CARICOM. He noted that each of the illegal guns seized could have killed a person.

Forbes said the goal of IMPACS is to improve citizen security in the region and create a safe, just, free and economically-viable environment and advance the region’s security interests in order that citizens may achieve their human development goals.

It is believed that at the end of the workshop participants’ interviewing techniques would be improved. So, too, would be their inspection of fraudulent documents, body language analysis and luggage and person examination.

The training will also seek to enhance the capacity of border security officials to identify and intercept persons, goods and vessels travelling across borders by illicit means or withing illicit intent.

Also expected to be improved via the workshop are screening techniques as this will allow for a reduction in wait times at checkpoints as passengers and cargo of no interest can be readily identified and processed.

Another benefit coming out of the workshop would be a reduction in litigation and poor publicity that may result from a less-informed interaction with Immigration or Customs officials.