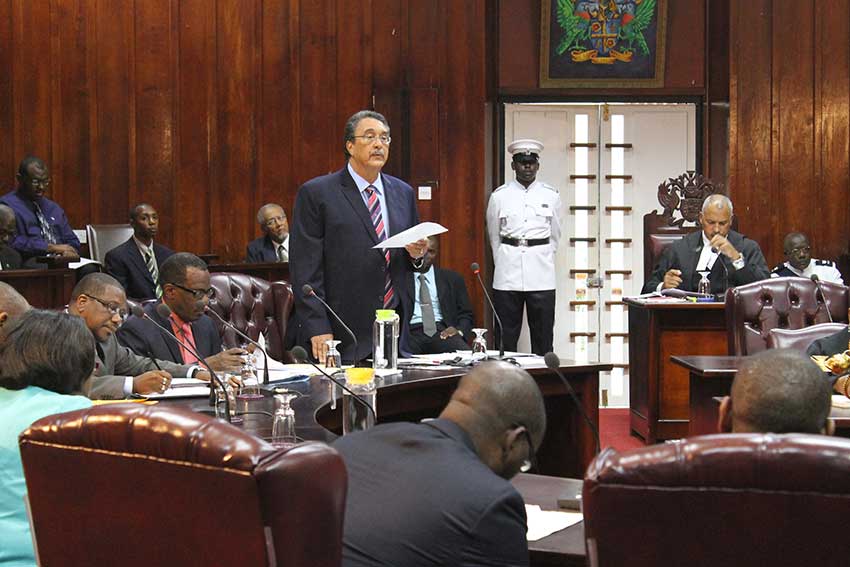 THE people have been buzzing about the Budget debate that took place in the House of Parliament on Wednesday and Thursday. However, while the topics discussed in the House were numerous, one matter stood out, particularly on social media.

Many who took to social media, namely Facebook, to discuss the debates with friends and peers while the presentations were in progress had one gripe in common — the constant bickering and underhanded jabs and mockery of members from both sides.

One parliamentarian, in particular, was singled out for being respectful, sticking to the point and ignoring the jabs thrown at him, namely Castries North MP Stephenson King.

However, other members steered far from the high road and came to the House ready to battle it out verbally.

One such parliamentarian, Castries South East MP, Guy Joseph, became the highlight speaker of the entire debate. His speech was laced with quips and jabs that left many in fits of laughter, but others upset. Many said he had invested more time throwing stones instead of highlighting his future plans.

One irate Facebook user wrote: “WTH is this. Guy’s performance is just ridiculous. SLP, SLP, SLP, mi r***. We want to hear your plans not BS!”

While Joseph’s speech was in progress, many viewers and listeners were reportedly tuned in via radio, television and the Internet, in order to hear what the minister, who is known for his quick wit and a sharp sense of humour, had to say — and he did not disappoint.

While the numbers soared and viewers admitted to missing their favourite television programmes, many were left unimpressed with the whole debate which has been dubbed “Circus Republic”.

The VOICE posed a question to Facebook users, asking them what their thoughts were on the common trend of bickering and sniping, and whether they thought the main objective of the debate was being overshadowed.

Here is what those who responded had to say:

“Apparently, shouting and jeering, empty chatting and “rising in the honourable house” to make statements with little to no substance draws much-needed attention to those who do the same. It’s about time we begin to demand more of the people who are supposed to be representing us and being the voices that speak on our behalf. Overall, I continue to be unimpressed with the discussions, or lack thereof, by persons who, quite frankly, should know better. It is about time that substantial discourse takes place on matters of health, education, social development, youth engagement, etc. We need to insist that the level of debate is raised. The power is literally in our hands.”

“I filter the bickering and digest the ideas policy directions and statements. However, I was not particularly impressed with the lack of policy directions on health, social services, security, agriculture and sports.”

“We decide what to focus on. There was plenty of substantive debate over the last couple of days.”

“I hated having to sift through all the nonsense to get the real ‘substance’ of what they were saying.”

“It’s about time debating becomes part of the campaigning and election process. Why do we just let these politicians come on podiums throwing words for each other, engaging in all sorts of unproductive talk? And then we expect different results when they are in power?! We need to poke and study these guys, to see what they made of….What we get in the end is the standard we set in the beginning. Our entire political system is a joke.”

“I can most definitely say that from watching Trinidad, Dominica and even Barbados Parliament, that even with our disgusting behaviour we still have one of the best but that does not mean it’s a good thing. I realized that when King spoke it didn’t happen. His debate content was nothing short of respectful and admirable. He simply did not engage anyone in poking at their sorry shortcomings etc. He simply stated where we are and what we need to do about it.”

Another contributor said: “If like (King), the rest of the presenters took a page from the Governor General’s Throne Speech, there would have been less name calling and fire spitting and more constructive and respectful discourse.”

Like one of the responders indicated, St. Lucians can indeed be relieved that the local budget debates are on the less volatile scale, unlike other nations.

While the local parliamentarians resort to underhanded verbal jabs, this year alone has seen a number of international governing bodies resort to physical violence during parliamentary sittings.

Some of those noted incidents include:

Pakistan, January 26, where according to india.com, Pakistan’s National Assembly was interrupted after a scuffle broke out between government and opposition lawmakers who exchanged blows and pushes after members of the opposition engaged in sloganeering against the government.

India, February 1, where there was flying furniture and uprooted microphones by opposition members in Jammu & Kashmir after members came close to clashing.

South Africa, February 9, where according to Quartz Africa, opposition lawmakers refused to allow President Jacob Zuma to deliver his annual State of the Nation Address which was being broadcast live on television. Zuma was called names like “Scoundrel” and “Constitutional Delinquent”. Shortly after, punches were thrown amongst men and women alike as the opposition lawmakers were ejected from the sitting.

Ukraine, November 14, 2016, where Leader of the Ukrainian Radical Party, Oleg Lyashko, was punched in the face by Opposition Bloc Deputy, Yury Boyko, after he was accused by Lyashko of having ties to Russia’s Kremlin.

Back in St. Lucia, the House is set to reconvene on May 9.