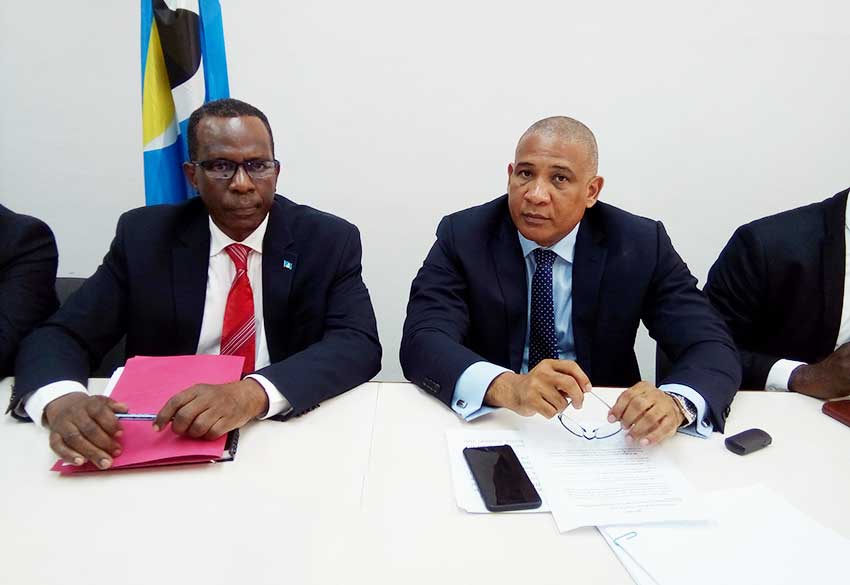 The walkout was preceded by an exchange of words between House Speaker Leonne Theodore-John and Castries South member, Ernest Hilaire over the removal of a motion that was down for debate at that sitting.

The motion was for parliament to negate changes to the Citizenship by Investment Programme (CIP) and was on the Order Paper to be debated up to the night before Tuesday morning’s House sitting.

The motion, which was to be laid in parliament by Hilaire is as follows: Be it resolved that Parliament by negative Resolution approve that Regulation 7 (3) (a) and Regulation7 (9) and Schedule 2 (1) Qualifying Investments as provided by Statutory Instrument No. 89 of 2015 be reinstated.

A letter from Theodore-John to Hilaire the morning of the House sitting was the spark which lit the drama that unfolded in the House.

Noted the letter: Dear Dr.Hilaire, I wish to inform that I am in receipt of a letter from the Honourable prime Minister, Leader of Government Business and member for Micoud South requesting that the Motion by your good self to negate changes to the Citizenship by Investment Regulation and which was previously set on the Order Paper for today’s House of Assembly sitting, be not debated at today’s sitting. The said request is predicated on the need for sufficient time to consume and prepare an appropriate response to the said Motion. I wish to further advise that I have acquiesced to the request by the Honourable Member.

Theodore-John concluded her letter by stating “in the circumstances, I regret to inform that the said Motion has been removed from the Order Paper and will not be debated as anticipated. It is expected that the Motion will be placed on a subsequent Order paper of the House for presentation and debate.”

The opposition did not take this in good stride claiming that all the procedures for laying a motion in the House were met by Hilaire, and despite the explanation given, this was not reason enough to have the motion removed the very morning it was expected to be debated.

Hilaire too rejected the explanation provided by the Speaker noting that there are established procedures by which regulations could be changed and this should be respected by the House.

Theodore-John however asserted that there had been previous occasions when items on the Order Paper were removed the day of a House sitting.

Said the Speaker to Hilaire “That, in itself and of itself is not new. Whilst I understand your sentiments I am saying it is not that the Motion will not be tabled in Parliament at all. I am not saying that. What I have said, I’ve written to you and indicated that the Motion will be deferred and will be heard at a later date.”

Speaker Theodore –John further told Hilaire that his motion was in order because the law so provides however the motion will not be presented or debated at Tuesday’s sitting.

“I have dealt with the matter. It may not be in the manner you are happy with but I am now proceeding to the next matter….,” she said in a tone of finality.