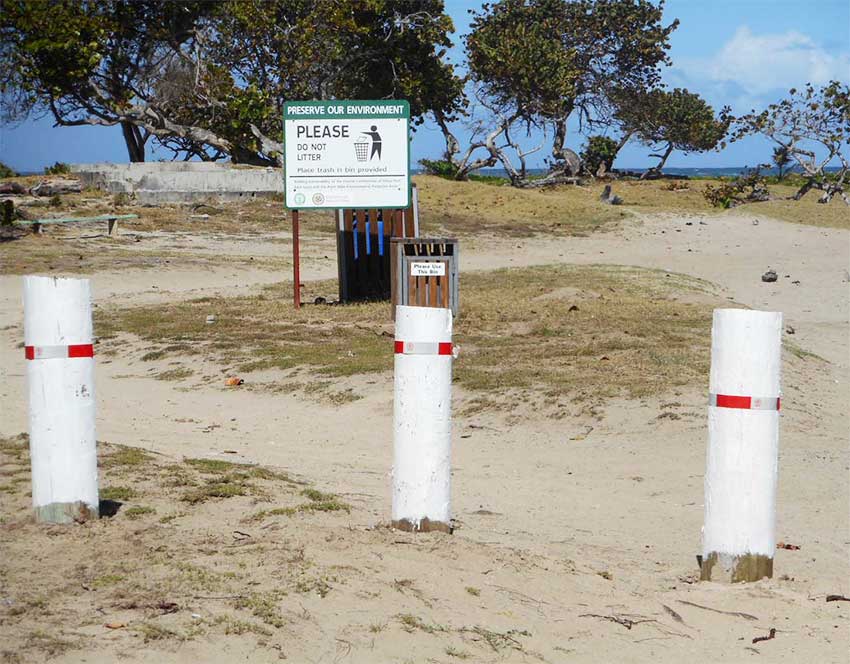 Among some of the measures taken so far, is the construction of a barrier on a section on the beach to restrict vehicular traffic and the establishment of a nursery to replace loss vegetation.

Over the years, there has been an increase in vehicular traffic along the beach which created pathways and hardened the beach surface, thus affecting the various species of vegetation. Vehicles of all types and classes traverse along the beach indiscriminately, especially during social events.

“There has been a gradual degradation of the shoreline due to unsustainable activities…The vehicular traffic in the area is getting out of control. Some vehicles go as close to the water as possible,” said Craig Henry, Programme Officer for the trust (Southern branch).

“We are regulating vehicular access to the beach, not pedestrian traffic…What we are doing is putting protective measures in place for the beach resilience to natural disasters” Henry said.

He said some people use the trunk of the trees as pit for bar-b-ques, which leads to their destruction.

According to him, the barrier is not a permanent structure, but was constructed just to permit the restructuring process.

Henry said another unsustainable activity taking place on the beach is illegal sand mining despite having monitors for such activity. He said a trench 12 feet long, 6 feet deep and 8 feet wide which occurred on the beach as a result of sand mining, was discovered by the Trust.

He said such activities do not only destroy the beach, but also affect turtle nesting and destroys infrastructure near the beach. He drew reference to a section of a concrete road next to the beach which has been in existence for many decades, but was destroyed by the 2013 trough which devastated the island.

“The level of flooding and erosion made it easy for the area to be compromised….” he said.

Henry added that the Trust had predicted that would happen. He said the Trust was able to obtain funds from the Organisation of American States (OAS) to assist with the restoration of the beach, among other things.

According to Henry, the need to find ways to save the beach was of grave concerns of the Vieux Fort South Constituency Council, Crown Lands and local community members who felt something had to be done to protect it.