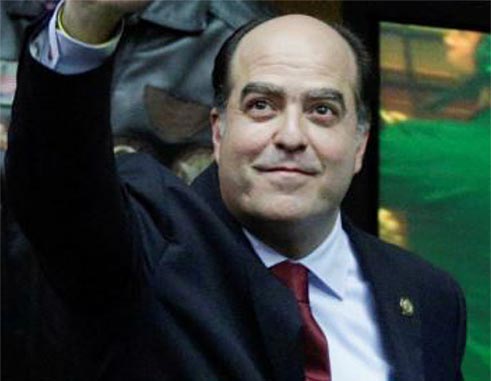 In a renewal of Venezuela’s bitter politics after the holiday lull, the ruling Socialist Party responded that the National Assembly was in contempt of the law.

The opposition coalition won control of the Assembly at the end of 2015 thanks to voter ire at Venezuela’s unrelenting economic crisis. But authorities blocked their attempt to oust Maduro via a plebiscite last year.

That has split the opposition between hardliners who believe civil disobedience is the only way to dislodge Hugo Chavez’s unpopular successor, and moderates who fear that could spark bloodshed and backfire in the OPEC member nation with the world’s largest oil reserves.

Julio Borges, a veteran politician and lawyer, tore into the president as he took the post of assembly president. But he backed the moderates’ push for solutions at the ballot box given what he deemed Maduro’s “abandonment” of responsibilities.

“With the greatest oil riches in the world, Venezuela’s people seek food in rubbish … the elderly faint in lines to seek food and medicines. It’s as if we are victims of a curse,” he said in an inauguration speech.

“What to do faced with a government gone from authoritarianism to dictatorship? … Fight, fearlessly and in every space, to save the constitution, Venezuela and the right to vote,” Borges added, calling for fresh elections for mayors, governors, president and legislators.

Given opponents’ failure to hold a referendum in 2016 after government-leaning courts ruled a signature drive was fraudulent, it was unclear how they plan to force Maduro’s hand.

Mayoral and governorship elections are due anyway this year, but Maduro has said repeatedly he will not cut short his presidential term ending in January 2019.

Borges, 47, who was hit in the face by a pipe-wielding government supporter last year and beaten up in congress in 2013, urged the armed forces to support new polls.

“Turning a blind eye to tyranny is to deny history and your raison’ d’etre,” he said. “Do you want to be the proud heirs of Simon Bolivar’s liberating army, or be remembered as the guardians of Nicolas Maduro?”

The opposition was hoping to enact new laws to grant property rights to slum-dwellers, allow workers to own state businesses, fight crime, and improve crop production on land nationalized by the state, Borges said.

The Supreme Court annulled nearly all the assembly’s measures in 2016 at the government’s behest.

Government supporters recall Borges’ support of a 2002 coup against Chavez and say he wants the same for Maduro.

Late on Wednesday, the president said the assembly should stop defying the Supreme Court. “It looks on track for self-dissolution and new elections,” he said.