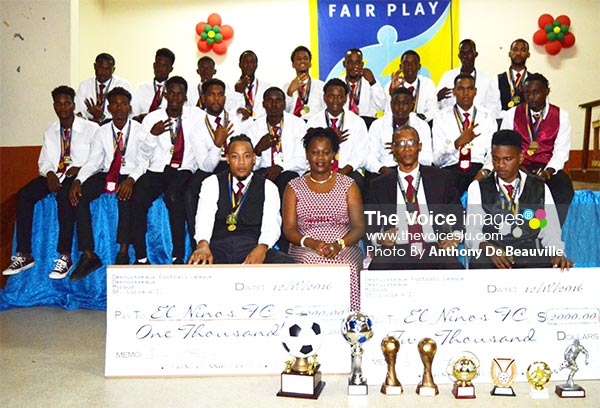 IT was no surprise when El Ninos football club and mid-fielder Delon Neptune topped the awards list the Desruisseaux Football League’s annual awards ceremony this past weekend.

Like previous years, the ceremony honoured the outstanding contributions of teams, players and sponsors at all levels in the league.

History was made when El Ninos captured all three major football titles played in 2016 – first team to do so – and the main award. The Most Valuable Player, Delon Neptune — also from El Ninos — took home the awards for the Most Goals and Best Midfield Player, making him the first El Ninos player to collect all three major awards up for grabs on the night as voted by a select panel of coaching staff.

“It’s a big honour to take home these awards. It was great to hold down my position this year. I felt my performances were good and I am proud to be recognized with these three awards,” Neptune said.

“I am very proud of not just the awards, but the outstanding performance of the entire team,” El Ninos Head Coach, CalusMonchery, told The VOICE. “The only individual award we didn’t pick up was for Best Goalkeeper. It’s no fault of our goalkeeper, but when you have such a wonderful defence, as a keeper you don’t always get to be in action. So the true reflection of your ability is not seen.”

He praised Neptune for his outstanding performance throughout the season saying, “Delon had a tremendous season. He performed very well and created opportunities as a midfield player, scoring 10 goals. Our lead striker, his older brother, Gerlanne, scored 9 goals. However, most of his brother’s goals came from his assistance.”

He continued, “There is a lot to look forward to come 2017. Some of these players should be nicely placed into the Desruisseaux senior team. But as a club, we will be competing in the Saint Lucia Football Association President’s Cup not for participation purposes, but to actually win and gain promotion to the SLFA 1st Division, which is our main objective.”