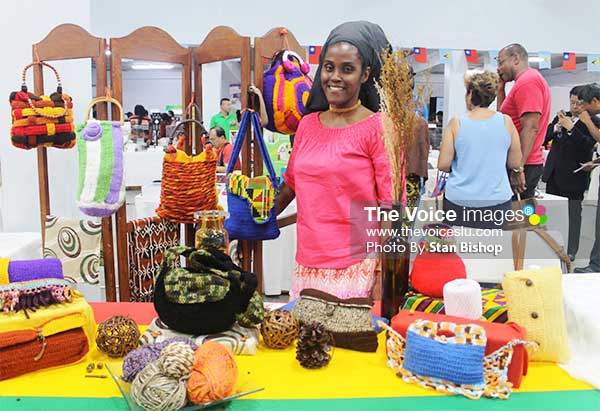 IN a tough economy, harnessing a special talent becomes a necessity in the quest to make ends meet for both the employed and unemployed. These days, it seems, more Saint Lucians than ever before are prepared to do just that, especially when they see their survival hanging by a thread.

Roxanne Cox is among the growing flock determined to reap the rewards from her special talents. Originally from Marchand, Castries but residing in Beausejour, Gros Islet for the past 15 years, she is already realizing the satisfaction that comes from owning her own business, Kaman-I Creations (Kamani-I being a combination of her sons’ names). The business’s name, she said, “brings that whole African roots vibe to it in terms of its pronunciation”.

“I basically specialize in crocheting clutch bags, side bags, wristwatch bands, necklaces and other accessories,” she said. “However, I also make custom-made items should customers prefer anything special. I’ve been involved in this type of work for about 13 years. Initially, I got into crocheting because I wanted to learn skills – not necessarily to create a business out of it.”

Cox, who also sews, said her passion for crocheting was so intense back then that most of what she knows now was actually self-taught despite her mother and aunt being proficient in the skill. With her mother’s job away from home taking up most of her time, Roxanne said her mother did not have the time to pass on her skills to her daughter. But Cox was inspired, nonetheless.

“I’ve always admired the creativity people were able to produce with their hands from virtually nothing but thread. A friend of mine who was good at it showed me the basic steps and I was hooked from then. Whatever pattern I visualize, I create. So I’m not one to draw sketches on paper,” Cox explained.

Aside from backaches and fatigue associated with spending long hours crocheting, Cox said other challenges include acquiring raw materials, dividing her time as a full-time teacher at Corinth Secondary School and being a parent. However, she said her dedication to her craft compels her to face down any challenges that would stand in her way of doing what she loves.

“So far, I’ve gotten some great feedback for my products and many people have commented on the high level of creativity and quality I employ in my work, including the fact that everything is handmade,” Cox tells me at a recent exhibition where she displayed her craft work. “So I’m just being humbled by the feedback and aim to improve wherever I can.”

In a society where even daring to start a small business is met with trepidation by some, people like Cox stand out because they prove that the entrepreneurial spirit does exist in Saint Lucia despite the hurdles that can often serve to discourage it. In fact, Cox has some advice to others thinking of becoming entrepreneurs.

“Be very patient and do a lot of research to see what the trend is and what people like,” she said. “At the same time, be true to yourself by producing quality work for your customers. Business is not just about making money but also respecting your customers by providing value for their money. Above all else, love what you do.”

For more information on Cox’s crafty ideas and products, contact her at 728 0061.