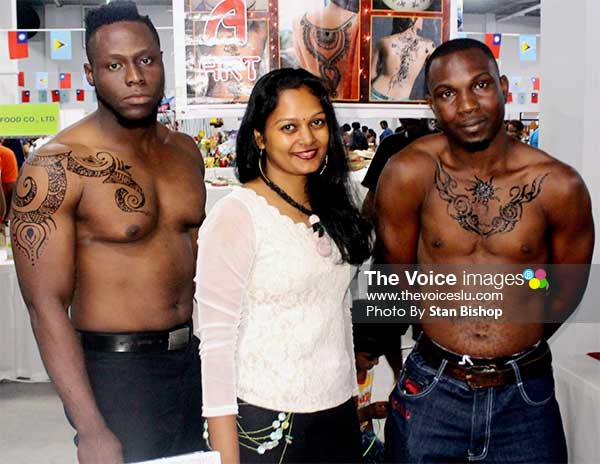 THE fashionable thing since the advent of fashion is that people keep coming up with more ways of presenting their appearances creatively. But it’s a tough job trying to achieve that transformation all by ourselves. That’s where people like Heera Patra come in — people who use their amazing talents to turn our bodies into works of art.

Heera specializes in henna, which refers to the dye prepared from the henna plant and the art of temporary body art (staining) based on those dyes. Used in the Arabian Peninsula, South and South East Asia and North Africa, the dye has been used traditionally on body partS such as skin, hair and fingernails, as well as on fabrics such as silk, wool and leather.

As a girl growing up in her native India, Heera was used to applying henna to her relatives’ hands and feet. However, she started doing it professionally when she and her husband moved to the United States eight years ago. At the time, they were going through some tough financial times and she wanted to do something to earn some extra money.

“When I started doing it as a business in the United States, I wasn’t really out to make a lot of money,” Heera tells me. “In fact, it was a satisfying experience doing it because I was pregnant during that time, so it was very therapeutic for me. I eventually realized it’s something I really loved doing and that made a big difference in how I approached the art. Through doing henna, my confidence has been boosted and I’ve been to places I’d never gone before.”

Around the time Heera took up henna art professionally, she was also pursuing an MBA in finance and marketing. She said the degree programme and her small business complemented each other since she was able to put into practice the theoretical knowledge she was gaining in the classroom.

Heera and her husband moved to Saint Lucia in August 2014. Soon after that, she ran into businesswoman, Cherisa Samuels, who would turn out to be one of her most positive business influences and closest friends. She said Samuels inspired her to set up shop here after being impressed with Heera’s work.

After Heera was told that the craft was not common here, she took Samuels’ advice and set up her Facebook page, Henna Saint Lucia. She now does henna art on all of the body parts to cater to the varying needs of her Saint Lucian customers.

“I never knew that this thing that I love so much could end up making me money. However, while doing it I also realized that it gave me an opportunity to meet new people, which I enjoy. I wouldn’t say I have customers; I prefer to say I have many friends. They have stuck with me from the very beginning. In fact, they seem to know everything about me because we treat each other like family,” she explained.

Heera does home visits and also sets up shop near malls and major events. On occasion, she gets some business from hotels and organizations. But she’s a big ticket at the Saint Lucia Jazz & Arts Festival, Independence activities, carnival, children’s birthday parties and other events.

Heera makes some of the inks she uses for her henna art because, she says, she believes in using organic inks that do not have chemicals that might be harmful to the skin. She also uses ready-made non-toxic inks that she buys.

Each henna pattern, she said, takes her between one and two minutes to apply and can stay on a person’s body for up to two weeks even if they shower regularly. Prices for her henna art begin from $25 upwards depending on the size. In some cases where full body art is done, she charges by the hour.

The henna art designs she applies are done by freehand, which explains why she has won over many customers – and friends – in the short space of time she has been building her business here. However, friends are free to have a custom-made design painted.

“I can do henna art for people from age 5 upwards,” she said. “However, many people believe that henna art is a feminine thing, which is not the case. So I find that whenever some men have henna art painted on their bodies, they are hesitant about posting the photos on social media. In fact, the people who seem to love henna art best are those who were skeptical about it at first but decided to try it.”

Heera participated in her first major trade show last November – the Saint Lucia-Taiwan Partnership Trade Exhibition – from which, she said, she has learned a great deal of experience, including networking across sectors.

The businesswoman said she plans to teach others the henna craft by visiting schools and organizations. Saint Lucians, she said, have been hospitable to her for the time she has been here and she wants to pay it forward. Great customer service, she added, is another hallmark of her business.

“My number one goal is having customers feel satisfied after they would have tried henna art. Secondly, I want them to have the feeling of wanting to do it again. If they’re satisfied, I know they will spread the good word,” Heera said.

Her advice to anyone with a dream is simple: “If you have a passion, pursue it. Maybe you might need to get some advice from or partner with someone else to be able to make that goal become easier.”

Heera says she never stops thinking about coming up with creative designs. Moreover, with an MBA to her credit, she foresees the day when her business can grow to such an extent that henna designs would be plastered on vehicles and buildings. So focused is she on her dreams that she has already gotten offers from friends and private sector interests to sponsor her expansion.